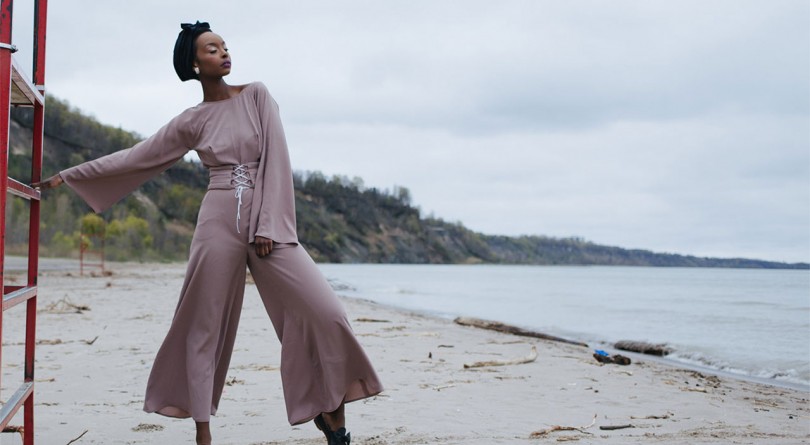 It’s no secret that modest fashion has become a hot topic over the past few years. Whether it’s about modesty being oppressive or some Muslimahs making modesty more appealing, people are talking about it now more than ever.

Adilah Muhammad and Halimah Muhammad, two young and northern-based fashion designers, have something to do with that. Expressing their individual creativity through fun styles and flair, these two young women are making their mark within the fashion world.

Adilah Muhammad, a Chicago-based fashion designer, didn’t initially see herself getting into fashion as a young girl.

“My younger self said I wanted to be a pediatrician, an artist and dancer,” she said. “I had sewn my first teddy bear really young. After that, my mother helped me with some shorts when I was 7 or 8, then when I was 9, I learned to sew in M.G.T. (Muslim Girls Training) class.”

She went to North Carolina A&T University and got her degree in fashion merchandising and design, where she learned more about her craft.

“I didn’t really design clothes [in college], but maybe that junior/senior year, I started doing alterations and correcting stuff. So I may make something for somebody here and there,” she said. “I got into the business of doing it after college because I couldn’t find a job, honestly. I was just kind of like, welp, I’m very unemployed so I guess I’ll just create my own thing until I get some money.”

And that’s exactly what she did. Adilah created Adilah M Studio, “a contemporary designer brand made for women with refined styles.” Her fashions are very minimal with a feminine flair, which is how Adilah describes her personal style.

“To some degree [my style] always changes. The only commonality is that it will always look feminine, but I like trying different things,” she said. “I feel like some designers will only design in a certain spectrum… I’m willing to use anything… I just like looking like a woman. And I like minimalism as well. I feel like I just do just enough. I don’t like to be over the top. I like stuff to make its own statement but still be minimal as far as details.”

“I like having fun with clothes and I like experimenting,” she said. “I don’t believe in taking yourself too seriously when it comes to clothing, so I like to keep it fun and playful, and I [take] the same type of energy when it comes to my designs as well. I try to design things that are interesting, that make a statement and that have meaning.”

Halimah attends school in Ohio but comes by way of Detroit. Fashion has been in her blood since before she was born, with her mother being a personal fashion icon. Halimah, when she was little, used to use her mother’s clothing in her own pretend fashion shows.

“As I got older, I was able to understand that I could actually be a fashion designer and grow. Being Muslim, I liked fashion and style, but I also dressed modestly,” she said.

Throughout high school, Halimah’s journey through modesty and fashion grew. She launched a YouTube channel surrounding modest fashion and currently has over 2,500 subscribers. Through her channel and social media platforms, she’s been able to encourage and inspire many people.

“I really, really want anybody that engages with my content, women and girls, to know that they are truly beautiful inside and out,” she said. “When I was a young girl, I dreamed of using my skills and art to start positive change in myself and my community… To inspire other creatives and visionaries. I started to do that with my blog and YouTube channel and social media outlets, and I’ve done a lot of rebranding. And with my [life of a fashion design student] series has been a sort of documentary series and shows my journey, but it’s bigger than that. Learning how to create, navigate through womanhood, what it looks like to live out your dreams. Overall, I would say my aim is to inspire and know that you are beautiful—inner beauty and outer beauty.”

Halimah has been able to showcase her designs in a school fashion show. Many people gave great responses and were excited to see something new and different.

“…The perception in people’s minds, like, just like shifting what people think is beautiful,” she said. “It’s okay because modesty has a lot of stigmas surrounding it. Like people have a certain mindset around modesty. They think of something frumpy and boring and I think with my designs and my work, I’ve been able to get people’s attention in a way that’s really exciting.”

The attention surrounding modesty and the dress of Muslim women has increased recently. With major brands such as Nike coming out with products aimed at Muslim women, modesty in the western world seems to step into the realm of acceptance.

Adilah doesn’t quite buy that.

“You see women today talking about modest women, but you’re still going to the store and that’s not the kind of modest we’re talking about,” she said. “It’s being commercialized. I’m going to showcase what’s modest to me, what I like to wear, what I think is cool and not really care if Gucci or Prada is trying to come out with something they think is modest. They design these clothes without any real consideration for people who actually dress that way. This is me designing my own stuff with people who look like me wearing it.”

Adilah said modesty is something that’s personal to her.

To Halimah, modesty is not just the way you dress, but a way you carry yourself.

“I would describe modesty as being humble or shy or reserved and I think that it’s a power, like being able to have the power to essentially restrict and cover and control the access that others have to you in any regards. Not just with your body, but with your spirit, your energy, your voice, your everything,” she said.

Both Halimah and Adilah have big plans for the future. Adilah wants to continue to grow her line and make her work process more efficient.

“Honestly, when I started launching my line, I was hoping to do wholesale (I would sell my clothes to other boutiques), but I’m starting to realize now that I see myself just growing my own brand and selling directly to consumers and growing it like that,” she said.

She desires to expand her team and her designs.

“I want to still produce everything in the U.S., everything gets produced in Chicago right now. There’s no overseas anything. A goal of mine that I really want to have is having my own sewing team.”

Halimah wants to grow her own designs, get into philanthropy, and create short films. Another goal that she has is to travel the world. She’s already been able to mark Senegal off of her list, and the fashion she’s seen there has influenced her way of thinking and her own style.

“I’ve taken away [from Senegal] a lot of pride in myself as a Black person, as a Black woman, my femininity. Something that’s interesting about being in a country like Senegal, the women are so conscious of themselves and how they carry themselves. Everyday is a moment. Everyday is just you’re on 10. I would be in the city and just oohing and aahing all day and being like they’re beautiful, but they’re like this is normal for us. This is just their standard of elegance and grace and carrying themselves in a powerful way,” she said.