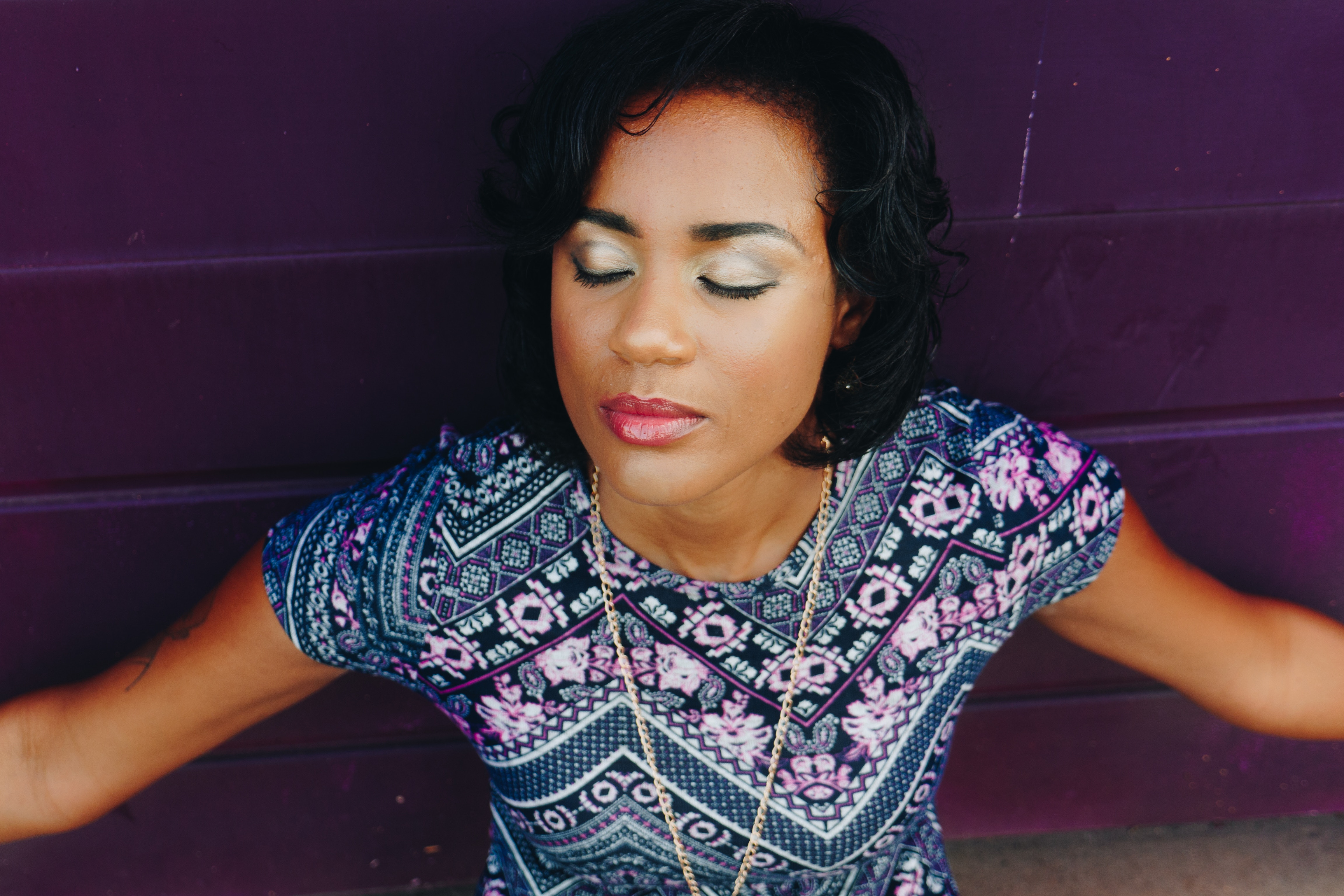 I’m in a private area with my team. All is quiet. My head is down. My eyes are closed as I get into the zone. The zone is found. I lift my head and begin to perform.

The practice performance took place during CUPSI, which stands for College Unions Poetry Slam Invitational. It is a national college poetry slam where teams of up to five members and one coach compete. CUPSI 2018 was held at Temple University in Philadelphia.

Mercer University’s Point B.L.A.N.K. (Believing Love And Nurturing Knowledge) poetry club competes on the national stage every year. Performing spoken word and competing in a poetry slam was never a part of my college plans, but Point B.L.A.N.K. opened me up to the art form. Before the club, I had one real piece that I classified as spoken word. “American Dream,” I called it.

I had been interested in learning more about spoken word before attending college, but I could never get into it. What differentiates spoken word from page poetry is spoken word is performance poetry. I perceive myself as being a good poet, but the performance part had always stopped me from delving into spoken word.

I had social anxiety disorder when I was younger. I self-diagnosed myself, of course, but the symptoms listed by the Mayo Clinic are spot on:

Fear of situations in which you may be judged? Check.

Worrying about embarrassing or humiliating yourself? Check.

Intense fear of interacting or talking with strangers? Check.

Avoiding doing things or speaking to people out of fear of embarrassment? Check.

Avoiding situations where you might be the center of attention? Double check.

Having anxiety in anticipation of a feared activity or event? Check.

Enduring a social situation with intense fear or anxiety? Check.

Spending time after a social situation analyzing your performance and identifying flaws in your interactions? Check.

Expecting the worst possible consequences from a negative experience during a social situation? Check.

I am a shy, introverted creature by nature. I didn’t know about social anxiety disorder until college freshman year psychology class. When I read the symptoms described in my textbook, I recognized myself.

It is easy to distance myself from the subject

I was between the age of seven and nine when Muslims of a Jacksonville, Florida mosque had a house party. The children that lived in the house hosted child guests in their bedroom. We were playing with toys and having a good time when I started to feel ill. I vomited, which caused embarrassment on my part and the other children to look on with disgust. After being cleaned up by one of the Muslim women, I was taken to a secluded bedroom. My escort put in Brother Bear and left the room, making sure to close the door behind her. Brother Bear had always been one of my favorite movies, so I sat back in the bed and relaxed. I began to feel well again early into the movie, but I could not voice my desire to rejoin the other children. Periodically the woman would come check on me, and when she did, I would open and close my mouth over and over like a fish. In the times between each visit, I mentally prepared myself. “Anisah, just tell her.” The words were there, in my head, but they refused to manifest.

Like Elsa, I taught myself to conceal, don’t feel

Poetry gives me a voice to manifest words, but I could never do spoken word. I am good at the “poetry” part, but when “poetry” and “performance” was added together to equal spoken word, I was hesitant. Then, college came, and Point B.L.A.N.K. was the only real poetry club on campus. Despite its focus on spoken word, I attended the first meeting.

During this singular moment I am speaking

I am Mr. Krabs in that one SpongeBob episode when he thought he was a robot

It has been over three years, but it wasn’t until the second year that I really started focusing on the “performance” part of spoken word. Summer of 2017, I wrote “Dear Majesty,” a piece that would become my staple spoken word piece.

Writing and performing “Dear Majesty” has been a tedious process. After writing it, I immediately had the urge to share it (I have only felt that way twice: the second time was early April after writing a piece while in Philadelphia for CUPSI). I recorded myself saying it aloud and started working on a subtitled video. I never finished the video, and the itch to share it was not scratched until the next school year: Fall 2017.

First meeting of the semester: “I have this piece I’ve been dying to share.” I shared it. Everybody snapped.

The club had an open mic at Jittery Joe’s, and I performed “Dear Majesty.”

The club held a poetry slam in early December to see who would be on the CUPSI 2018 team.

Only five people could be on the team. Only six people performed. I was not in the top three, but I made the team, which meant I could no longer sit back and enjoy writing poetry. I had to actually pay attention to the way I was performing.

Spring 2018 kickstarted CUPSI practice. We practiced twice a week for hours on end. We critiqued each other, and Ryan Jones, our coach, critiqued us. The main criticisms aimed at me:

“Your rocking makes me feel like I’m on a boat.”

“Make sure you slow down and pause when appropriate.”

“Your facial expressions and your tone of voice has to match your words.”

“How do you feel about that? I need to see and hear that feeling.”

They tell me to be like Toph, to embrace the inner robot inside

I am the tin man without a heart, the cowardly lion whose friend pushes me out into the open and there is no place to hide

I performed “Dear Majesty” so many times that I began to get sick of it. I started to lose passion for it at a time when it was detrimental to do so. My performance had to feed off of the original passion I had when writing it.

The poem is about a mother who is at the hearing of the officer who shot her dead son. She is pleading with the judge and trying to make him understand how it feels when a mother loses her son. Her voice within the poem is on the cusp of sounding like an insane woman, as her son’s death and the pain she feels affects her mental stability.

The character gives life to a robotic being

One of my team members, Shy, walked me through the piece. She said something to the affect of: “Put yourself into her shoes. You want this man locked up. You’re trying to convince this judge. I need to feel that sadness and anger.”

Others told me to put emphasis on certain words, and they suggested motions at certain parts. About a week before CUPSI, the ending of the poem was revised.

I still, however, wasn’t ready, performance-wise. I performed the poem perfectly only once, and that was the day, the very hour before Point B.L.A.N.K.’s slam bout. When I say perfectly, I mean no feedback was required.

“I need you to go on that stage and do it just like that,” Tamar said.

Part of perfecting the poem came with getting into the necessary zone required.

“Take the time you need to find that space,” Ryan told me.

When first performing the poem, I didn’t have that zone. About two weeks before CUPSI, I found a zone, but it only worked once or twice. That zone was thinking about all of the death by the hands of police officers and all of the instances of police brutality in the country. I discovered that zone began to get stale, because it was too broad and not specific to the grieving mother in the poem.

The practice performance the hour before the bout, I tried a new zone, and it worked.

I took her words to heart. The new zone was imagining that I was speaking directly to the white judge in the poem and remembering that I also need to speak to the jury and audience. I feel as though in that zone, my whole tone of voice changed. My demeanor and my approach to the poem changed. I truly became one with the character, and that made all the difference.

How would you feel

If your son was killed

Your Black Magic being sucked away down an endless drain

You dare make a travesty of my tragedy, making mockery I loathe your

This is not fantasy, this is my life, this is reality

And yet there you sit

For my dead son

When the cop shoots, you will hang from a tree

Justice is broken, the country will fall

And down comes your Majesty, bloody and all

In your forever cave, your grave

I don’t think you’ll ever realize

Of this pain, the saneness of my insanity

How it feels when your son is killed

Then you question, is it real