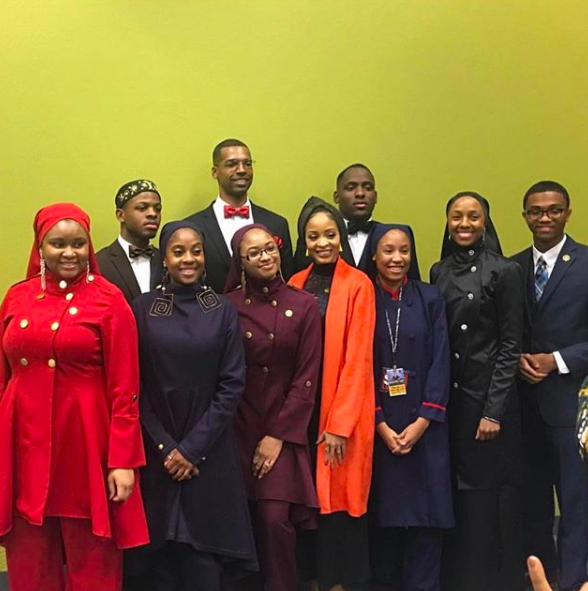 The way there was leaden with unfortunate events and anxious praying. It was my first flight alone, but I eventually arrived at the Hyatt Regency McCormick Place, the hotel I was staying at for the crowning event of Black History Month: Saviours’ Day.

Saviours’ Day 2018 may be my favorite. Perhaps it’s because of the sisterhood I experienced. It was alleviating to stay with sisters around my age that I could relate to. It was different from talking to my college friends. Another level. I love the friendships I’ve made in college, but I often feel stifled. I can’t talk to them freely without having to explain or without being ready to defend my words.

They’re my friends and I love them to death, but there’s something about friends vs. sisters in faith.

The Nation of Islam is a family.  Saviours’ Day is a family affair. Everyone’s new names become “uncle and auntie,” “brother and sister.”

The Honorable Elijah Muhammad told the Black man and woman to use the titles “brother” or “sister” when referring to one another in order to instill love back into the Black community.

But at a certain point, you can drop the title because you already know that’s your sister or that’s your brother.

There’s nothing better than having a group of people surrounding you that vibe on the same frequency. What I experienced during Saviours’ Day was just that. The titles were dropped, symbolizing the emergence of true sisterhood.

The Honorable Minister Louis Farrakhan has been stressing the importance of family for a while now. In August 2017 he spoke at the Family Summit held in Atlanta. He wants the black community to establish a strong family unit.

Minister Farrakhan is always a highlight of Saviours’ Day, but this year, something was different. He was happy. It’s not like he isn’t ever happy, but he enjoyed seeing us, his family. If you think the sun is the brightest thing in creation, you haven’t seen Minister Farrakhan’s smile; it lights up the room.

He smiled and he thanked us. This is a man who has been working for 63 years on behalf of Black and oppressed people, and he thanked US. I don’t think you understand the significance of that. They say you judge a man by his action. The Minister has proven his divine love for Black people through his works: cleaning up the Black community, resurrecting the mentally dead, urging Black people to make their communities decent and safe places to live, demanding justice on behalf of us from the US government.

Through Saviours’ Day 2018, the world witnessed the glow of Farrakhan. It witnessed his love, and I, personally, witnessed the love of those reflecting his light.