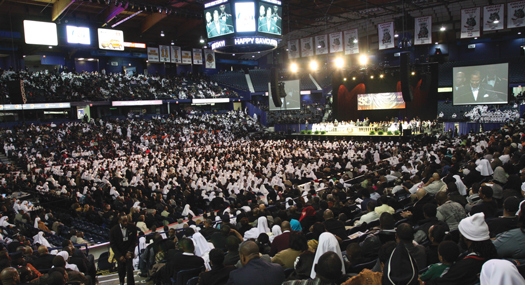 One thing that has been increasingly repeated when Black History Month rolls around is this: “We talk about the same people and the same things.” The impact of the Civil Rights Movement, the sacrifices of Rosa Parks and the Black inventors who gave us the technologies we have has now been reiterated every year, and for good cause. However, those aren’t the only things worth celebrating during Black History Month.

It’s time for people to be introduced to the crowning event of Black History Month – Saviours’ Day.

It’s pretty sad that Saviours’ Day has been around before the 1950s with a resurgence in the 1980s, yet the masses of the people don’t know about it. Here’s a rundown: Saviours’ Day is the celebration of the birth of Master Fard Muhammad, a man who came to North America on July 4, 1930 and announced the beginning of His mission to deliver Blacks and oppressed people from their oppressors. It is a holiday that was established by the Nation of Islam, which is observed every year on Feb. 26.

Now, don’t jump up and say, “I’m not a Muslim. Why should I celebrate Saviours’ Day?” Understand that there’s a broader concept and idea to Saviours’ Day, and that is the building of a nation that is founded on three principles – freedom, justice and equality.

With events surrounding Black and oppressed communities all over the country, all over the world, it’s evident that freedom, justice and equality is needed. People yearn for it down to the very core of their being. After seeing such a society portrayed in the movie “Black Panther,” people have made memes and slogans surrounding the fictitious nation of Wakanda, saying they wish they lived there.

What if it could be made into a reality? And what if Saviours’ Day and what it stands for is a step towards that?

A few weeks ago, Charlamagne Tha God posted a picture of the Most Honorable Elijah Muhammad, the teacher of the Honorable Minister Louis Farrakhan, Muhammad Ali and Malcolm X,  that said, “Elijah Muhammad Been trying to Build Wakanda since 1933.” The caption read, “Facts or Facts Kids. The Blueprint still here tho. I keep telling y’all to read ‘Message To The Blackman’ but y’all don’t hear me tho and that’s cool cause it ain’t for everybody. If you don’t get it that’s probably why you don’t got it. 🤷🏾‍♂️ Praise Be To God. 🙏🏿”

This is why Saviours’ Day is not just for Nation of Islam members, but for those who want to build a nation where all can live in peace.

The Saviours’ Day convention spans over a three-day period with workshops surrounding the nine ministries – spiritual development; agriculture; education; information; health; trade and commerce; defense; justice; arts and culture and science and technology – all of the elements that support a thriving and independent nation. Everyone comes together to enjoy evening events, which might include receptions, concerts, and drill competitions/exhibitions. On top of that it’s a family environment where you get to see people you haven’t seen in months, where you get to spend time with your family and simply have fun.

Saviours’ Day supports the idea of Black independence. It’s a few steps towards making that idea into a reality.

That’s something worth celebrating not only during Black History Month, but every month.