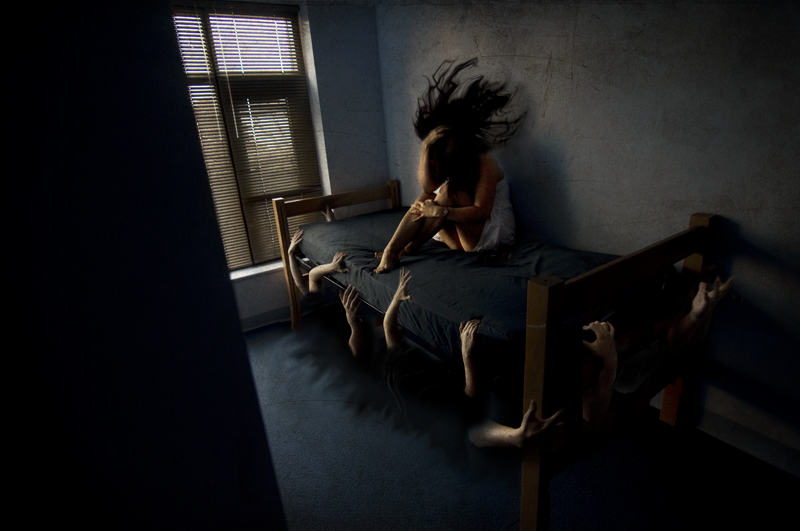 “We are now witnessing what movies futurized about for centuries: human beings with telepathy.”

I lay on my mommy’s arm as she watches the news.

“Everyone was always able to do it on a small-scale, of course. Like when you thought of someone and they called you up on your cell. Or when you thought something and the person sitting right by you voiced that very thought.”

“You ask too many questions,” she says. “I’m trying to hear.”

The newsperson goes on, “What I’m hearing from reports from all over the world is that this new ability only manifests when danger is present. The very first report was 5 years ago when a mother and son helped each other escape from a serial killer by communicating telepathically. When they told their stories, scientists examined the two and realized increased brain waves and brain activity.

“Ever since, they’ve been studying it, attempting to mimic it, teaching people how to hone their small-scale telepathic abilities, and 15 years from now they predict that we will be able to use it not just in dangerous situations, but in our everyday life. And maybe one day witnesses of crime will be able to SHOW law enforcement exactly what happened. In other news, Facebook has developed…”

“Ain’t that something?” my mommy asks.

“That’s something,” I say, even though I didn’t understand a word.

My mommy looks at the time on her phone. “Shoot!” she cries. “I’m bout to be late!” She pushes me off her arm and rushes out the front door, purse in hand.

Home alone again. I sigh. We’re kind of poor, so my mommy doesn’t have the money to pay for a babysitter. But my mommy has a new job, now, and she should be making more money.

I grab the remote and change the channel to Spongebob. I watch it for a while until loud police car sirens interrupt the sound of Spongebob’s laugh.

Everything is a white blur. Giants walk in slow motion as they try and stop the loud beeps coming from the machine I’m hooked up to. Wait, machine? Why am I hooked up to a machine? Wasn’t I just watching Spongebob? I try to open my eyes, to get rid of the white blur, but my head aches.

All of a sudden, I’m overwhelmed with drowsiness, and I drift to the world of dreams – and nightmares.

The nightmare starts off with a loud sound, a firecracker kind of sound. Except it’s not a firecracker. I don’t know what the sound is coming from, but I feel like I’m supposed to know.

I’m running, but then I stop and turn. My mommy lies there, bloodied. She’s about to die, I know it, but somehow I hear, “Hide, Kiya.” So, I run some more.

I don’t know where I’m running to. Maybe I’m running to my room, my bed, my only salvation from the monsters I know are out there, looking for me, attempting to target me.

I wake up again, gasping. I must be out of breath from all of the running, I tell myself. This time I only see one giant. I look around the room. I don’t see the person I’m looking for. I try to cry out for her, but I can’t. I have no voice. Where is my voice, I wonder.

I want to ask where am I and why I’m here, but I know there’s no point in trying to talk. My voice is gone – my punishment for not saving her. But it was only a nightmare.

I wave at Dr. Jamison.

“How are you feeling?” she asks.

I give her a thumbs down.

She frowns. “Some police—”

My body tenses at that word: ‘police.’ I don’t know why. Police are good, aren’t they? But I feel like I’m forgetting something. I feel like…but it was only a nightmare.

“—are here to see you. They want to ask you questions about what happened. Let me know if—” she must have found out about my punishment because she rephrases her question, “—Give me a sign if you’re willing to tell them what happened. You’re a key witness.”

What’s a witness again? I can’t ask, because I’m punished. Punished for…but it was only a nightmare.

I’m only 7 years old. She must know that, right?

“Your aunt is here. Would you like her to come in?” Dr. Jamison asks.

My mouth opens, but the question doesn’t come out. ‘Where is my mommy?’ But even though it was only a nightmare, I feel like I already know the answer.

So I just nod.

The doctor leaves me to my thoughts. It doesn’t take that long for my aunt to come rushing in.

As she hugs and kisses me, I examine her. Her eyes look kind of swollen. Her usual smile is gone, replaced with worry. She smells. Not as bad as my bloodied mother…wait, where did that come from? It was only a nightmare.

“What did they do to my baby?” she whispers.

What did who do, I want to ask, but the only thing that comes out is a cough. All of a sudden, I’m tired again. Even if I wasn’t punished, I wouldn’t feel like speaking to Aunt Deborah. So I close my eyes.

I hear her sigh. She strokes my curly black hair. She kisses my cheek again. “Everything’s going to be ok,” she whispers.

I wish I could believe her.

But her words and her touch disappear as I enter another nightmare.

This time, my mommy has a gun in her hand. She whispers to me, “They’re trying to kill me, Kiya.”

“They followed me all the way to the apartment. If anyone asks you, tell them that. Tell them I was stalked to my apartment, I locked my door to hide inside, and they started threatening me.”

The front door is kicked open. “Put the weapon down!” the man shouts.

My mommy clamps her mouth shut, but somehow I hear her say, “The police. You know I was late to my new job, so I started speeding. Then the siren came off—”

“Mommy!” I yell as I see the police aim at her.

Her words —thoughts?— are faster now, “—and I raced home. But they followed me and called for backup. Over a damn—”

Her words/thoughts are cut off as the loud bang sounds, the firecracker kind of sound. Except it’s not a firecracker, and my mommy is bloody.

And then I see them point at me. So I start running.

“Kiya!” Aunt Deborah’s voice pulls me out of the nightmare.

I’m sweating, breathless. From all of the running, I tell myself. Running from the monsters in my nightmare.

“You were dreaming,” she says.

No, I want to tell her. I wasn’t dreaming. It was a nightmare.

“What were you dreaming about?” she asks.

About my mommy’s death, I want to say. But I want to cheer her up that it was only a nightmare. My mommy’s not really dead.

But she isn’t here.

“She is suffering from—” I hear Dr. Jamison.

When did she come back in here?

Whatever that is. But I know I’m not suffering from anything. I’m being punished. She tried to tell me, but I was too stupid and too slow to save her. Now she’s dead. But it was only a nightmare, I tell myself.

“So they killed my sister and now they killed the only voice that can speak out against them?” my aunt asks.

But no, that’s not right. They didn’t kill your sister, I want to say. We must be having the same nightmares.

Dr. Jamison nods and walks out.

“Kiya,” my aunt says softly. “Please tell me what happened. I can’t believe the media or the police. Only you.”

Why doesn’t she know, I wonder. She’s having the same nightmares, right?

I want to tell her my nightmares, now. But I can’t. Because to tell would make it be real, even though it was only a nightmare.

I look at my aunt. I see surprise in her eyes.

“It wasn’t a nightmare,” she says. “You can tell me. You have to help me put those creatures into prison.”

Did she just hear my thoughts, I wonder. Will I be able to show her my nightmares?

Sleep doesn’t come easy, and both of us sit in silence. When sleep does come, the nightmare, this time, starts with the sirens.

Except, I’m not asleep, and it isn’t a nightmare. It’s a memory.

Somehow I know the punishment is over, so I whisper, “I wanted to believe it was only a nightmare, auntie. But it was real.”

We hold each other and cry. And then I share with her, no, I SHOW her, the memory.

I show her what happened after the sirens interrupted my Spongebob episode.

My mother comes in, slams the door, and locks it.

Instead of answering, she peeks out of the blinds. I peek with her. I see two police cars and a black van.

My mommy goes to the kitchen drawer and pulls out a gun. I always knew it was there. We live in a dangerous neighborhood, so it has to be there.

A man gets out of the black van. He looks like a human, but he isn’t, because I know a human wouldn’t cause my mommy to go to extremes, to grab a gun.

A knock on the door. I know it’s the man from the black van. “Monster!” I yell through the front door.

My mommy grabs my arm with her gun-free hand. She pulls me back and whispers, “They’re trying to kill me, Kiya.” She says it as if it’s a fact of life, as if she always knew she would die young.

I continue to tell my story.

When the man shouts at my mother to put her weapon down, another one yells out, “She’s holding her daughter hostage!”

I want to do something, but I can’t. I want to stand up for my mother, but the words of the cops and my mommy’s thoughts entering my mind are too much, and before I know it, the gun sounds and my mommy is bloody.

“Hold your fire!” one of the cops says, but the words are too late.

Then the gun aims at me, so I run. But I can’t leave my mommy, so I stop and turn. She’s about to die, I know it, but with her thoughts she tells me to hide, so I run some more, until I feel pain in my arm.

‘I wasn’t being held hostage’ are my only thoughts. Somewhere between those thoughts and me trying to fight an officer attempting to pick me up off my apartment floor, I pass out.

When I’m done telling my story, Aunt Deborah says with sorrow in her voice, “Those police are beasts that preyed on my sister.”