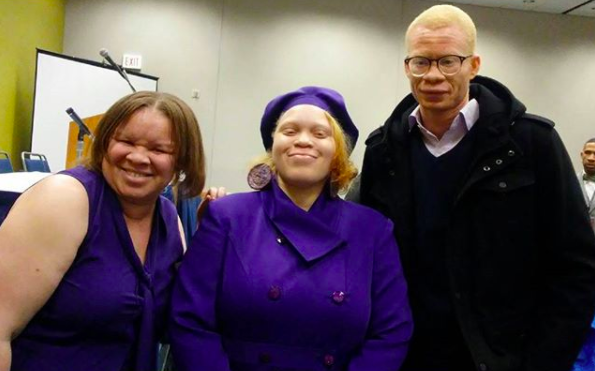 When there’s talk about Black people, or what is referred to as “people of color,” many see images of slightly or heavily pigmented skin shades in their minds. Many think they can easily point out a Black person while walking down the street or shopping at the grocery store due to distinct features—broad noses, dark eyes, brown skin, and a certain hair texture. We proudly boast our distinctness with hashtags like #MelaninOnFleek or simply, #Melanin. However, there’s a certain feature that many people overlook when considering Blacks—the lack of melanin.

Albinism is a condition characterized by the lack of the melanin pigment in the hair, skin and eyes. As of 2009, it affects fewer than 200,000 Americans and around the world, between one in 17,000 and one in 20,000 people are albinos.

People with Albinism are often gawked at and questioned about their identity by those who don’t look like them. Due to this, Qiyamah Muhammad, an 18-year-old Washington D.C. resident with albinism, created an organization called Confident Albino Brothers and Sisters.

“I started when I was 16-years-old to not only help people with albinism who have low self-esteem, but to also bring awareness to the plight of albinos worldwide,” Qiyamah Muhammad said. “In certain parts of Africa, people with albinism are often attacked, killed or mutilated due to a belief their body parts contain magical properties. My goal is to lessen and help take away the prejudices, myths and misconceptions some may have about albinos.”

Growing up with albinism, Qiyamah had to deal with being stared at while in public and being questioned by others her age. Most of the questions she would get would deal with whether she was Black or White and if she was sure about that. Due to the fact that albinos typically have eye conditions that result in their eyes moving back and forth, many of her classmates asked her if she could stop.

“It used to bother me but because I have a strong support system with my family and the Nation of Islam, who always instilled pride in not only my Blackness but being proud of my albinism, it helped develop a positive self-esteem in myself,” Qiyamah said.

On her Instagram and Facebook page, Qiyamah started a video challenge campaign called, “Why Yes, I’m Albino.” So far, albinos from all over the world have accepted the challenge and are continuing to submit videos.

“This campaign is to take back the word albino and show that there is nothing wrong with being albino,” Qiyamah said.

Qiyamah has gotten great responses from her campaign through Instagram, Facebook, Tumblr and YouTube. She’s met people with albinism from places such as Africa, Australia, France and London.

All of her progress led Qiyamah to host an event on the third annual International Albinism Awareness Day last summer. The theme was “Shining the Light,” and it included a video presentation of “Why Yes, I’m Albino,” that represented albinos from around the world. The keynote speaker was the Honorable Minister Louis Farrakhan via Skype, who provided words of guidance for the Albino community.

“The event was awesome,” Qiyamah said. “It far exceeded my expectations.”

From the Internet to Paper

Qiyamah’s work has led her to spread her message through means of art by creating a female albino superhero named Niyair.

“My brother Asad Muhammad is an illustrator who has always had long term goals of creating his own comic books,” she said.  “Both of us together thought it would be a good idea to have the first comic book with a female albino as the lead character. Because of the lack of positive Albino characters in mainstream media, the comic book addresses the negative reputation associated with albinism in Pop Culture.”

Qiyamah and her brother plan to make more comics that address the same issues and can be supported at  http://comicbookniyair.mydagsite.com/.

Don’t be Afraid to Stand Out and Be Different

Qiyamah continues to work diligently to encourage albinos worldwide, organize events, and spread her message. She would not be where she is today were it not for her family and her spirituality.

“My family encouraged me to embrace my differences,” Qiyamah said. “They, along with Allah, helped me to not be afraid to stand out and be different. They taught me that there was nothing wrong with being different. I created this platform not necessarily to be seen but to help other albinos, and it has grown beyond what I ever imagined.”

As she continues her journey, Qiyamah inspires albinos all over the world to be confident and in love with who they are. Despite her many identities, she has learned how to use them to encourage herself and others to be uniquely themselves.

“I am a Muslim, a student, a daughter, a niece, a granddaughter, a young Black woman and why yes, I am albino.”