Netflix biopic “Roxanne Roxanne” allows younger generations to learn about the origins of hip-hop, and older generations to get a glimpse into the life of legendary battle rapper Roxanne Shante.

Roxanne Shante is a hip-hop pioneer from Queensbridge, New York. She battled local rappers for money as a kid, and her first and biggest single was released in 1984. At the age of 15, Shanté Gooden made it big with her debut “Roxanne’s Revenge”, produced by Marley Marl. This singe gave birth to her new persona, Roxanne Shante. 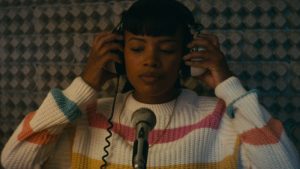 This is the story that Roxanne Shante fans are familiar with, but this Netflix film shows the life of the rapper behind the fame. The movie touches on alcohol addiction, money issues, domestic abuse, and many other difficult topics. Viewing a star like Roxanne Shante, it is easy to forget that she is a teenager. In the movie we see that she never got to fully enjoy her childhood. Even before the fame, she was burdened with the responsibility of taking care of her mother, who struggled with alcoholism, and her siblings. At the peak of her career, we see that she became entangled in a toxic and abusive relationship. The issues that Roxanne Shante endures makes her story relatable to people of all walks of life.

We also get to see the influence she had on other big time hip-hop artists. Biz Markie, most known for his song “Just a Friend” is first introduced as the bodyguard, but he later becomes the beatboxer on one of Roxanne Shante’s tours. We also see a young Nas, whom is also from Queensbridge. In the movie, Nas works up the nerve to rap for Roxanne Shante. He went on to become arguably one of the best rappers of all time. 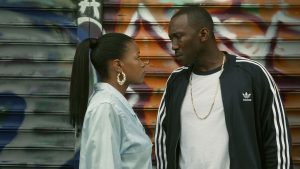 The movie is also very empowering for women. Hip-hop has always been a male dominated field. To see Roxanne Shante fearlessly battle men and win proves that women are absolutely capable of succeeding in anything. Roxanne Shante paved the way for future female rappers from MC Lyte and Queen Latifa to Nicki Minaj and Remy Ma. Through campaigns like the Women’s March, we see that there is an emergence of a modern Women’s Movement, and for this reason, I think now is the perfect time for the world to see a movie like this. Women empowerment is not a new concept. Women have been excelling in fields and overcoming obstacles since the beginning of time, and this movie illustrates that perfectly.

The movie, written and directed by Michael Larnell, is the perfect movie to bring two generations together. It allows millennials to see how hip-hop has evolved over time. It also portrays the star Roxanne Shante as more than just a hip-hop icon. The decision to depict her as a person who goes through things just like the rest of us was a wise choice by the writer and I think the audience will think the same.