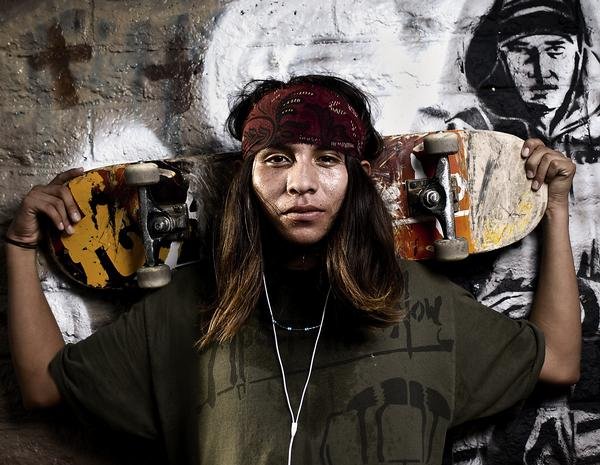 (Note: This post was originally published in February 2018, but has been updated in November 2019.)

Skateboarding. It’s pretty much a dying hobby in the U.S. Outside of 90s and early 2000s TV shows, it’s rare to see people commonly engaging at a skatepark. Do those even exist anymore?

There have been new innovations to try to replace the piece of wood on wheels, such as the Penny board and the hoverboard, but the classic skateboard simply doesn’t seem to be making a comeback. Despite its lacking popularity, a Native American skate team out of San Carlos, AZ has found a way to use skateboards as a method of social resistance.

Douglas Miles, an artist and photographer with roots in the San Carlos Apache Nation, founded Apache Skateboards 15 years ago when his pre-teen son broke his skateboard.

“He broke his. We went to the mall, and I couldn’t afford the name brand one. There was one with nothing on it. I told him I could afford that one and when we get home I’d paint it for him,” Miles said.

Using his painting skills, Miles went to work on the board. He painted an Apache warrior on it, symbolizing the Apache warriors who fought during the 1850s to keep Apache territory free. It also symbolizes the prowess the warriors had among their enemies. Miles’ son zipped around the neighborhood riding his newly painted skateboard, and when he returned home, it was the most popular mode of transportation riding the streets. Thus, Apache Skateboards was born. 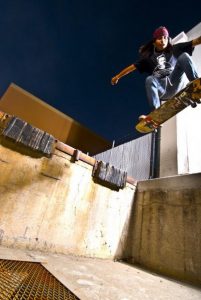 Apache Skateboards is not only a brand. From it came a rising crop of Apache youth who have a passion for skateboarding, art and their Apache culture. Unfortunately, when the team first began, people didn’t take them very seriously. But as the years went by, the team has been invited to do skating demos, they’ve put together their own short films, and they’ve developed other artistic skills.

Miles feels that many companies aren’t tailored towards Native American, Black or Latino populations, but rather, towards White consumers. This is one driving factor behind Apache Skateboards.

“I wanted to create something for Native people that we could be proud of and say, ‘this makes me more proud,’” Miles said. “Native people are actually really proud already. I put Apache warriors on the skateboard, which is what I call the original de-colonizers.” 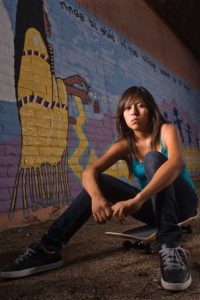 Apache warriors are a symbol of pride for Apache nations across the country, the most popular being Chief Geronimo. After being forced onto Arizona’s San Carlos Reservation in the mid-1870s, Geronimo led his followers on several escapes that was the basis of his legend and embarrassed the U.S. government. Repeated escapes under his belt provoked U.S. politicians.

“So by putting the art of Apache warriors and history on the skateboards, it was a reminder of the great history of Native American people’s history in this country, particularly, Apache people,” Miles said. 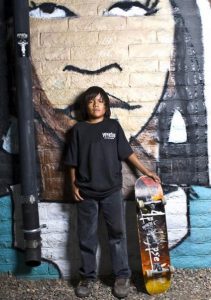 Apache youth in their early teens have been part of the skate team, and they have stayed up until their late 20s. Many of the youth on the San Carlos Apache reservation haven’t been out of its boundaries. The skate team has allowed them to travel to places across the country. Miles said everywhere they go, they film themselves and take photographs.

“A lot of them have gone on to good jobs, gone on to college, went off to study photography, doing even greater things, in a way, from having the opportunity to work and travel,” Miles said. “We’ve traveled all the way to New Jersey, Minnesota, California two or three times. I think the team traveling opened up their eyes to all the possibilities of where they can go in their young Native life.”

According to Partnership With Native Americans, while 60 percent of U.S. students go on to college, only 17 percent of American Indian students continue their education. Miles said on his reservation, more and more students are heading to college.

“One of the typical [challenges] of going to college for Native kids is geography and close family ties,” Miles said. “ It’s tough for them to move away because families are close. They do enter into a different world, so to speak, so there’s a little bit of the culture shock for some Native kids.” 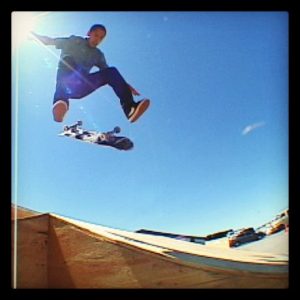 Now, Miles’ son, Douglas Jr., is taking on the responsibility of managing the team. Despite obstacles that they have faced throughout their nearly two decades of operation, the racial climate in the U.S. and more obstacles to come, Apache Skateboards is not deterred.

“Because of institutional racism, people don’t want to see the body of work we’ve created in 15 years,” Miles said. “It doesn’t stop us or slow us down. We keep skating. I keep painting. How we put that to work [is how we] empower people in our own communities.” 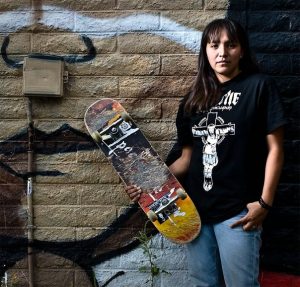 Apache Skateboards came out with a short film titled “The Mystery of Now,” showcasing the socio-political context surrounding the history of life on the San Carlos Apache Reservation. The film also gives viewers a visual of how and why Miles started the skateboard brand and team. The film was tweeted out by National Geographic and other platforms.

All images used in the post are courtesy of Apache Skateboards.