Minister Farrakhan will be 85 years of age on May 11. This is the first installment of five honoring his life, his journey throughout the Nation of Islam, his mission, his accomplishments and his legacy.

Thousands congregate to listen to his words. He has sparked life inside of many. He has been working for the cause of freedom, justice and equality for 63 years and does not show any sign of retiring.

The man I am speaking of is the Honorable Minister Louis Farrakhan.

Minister Farrakhan was born as Louis Eugene Walcott on May 11, 1933 in Bronx, New York. He has family roots in the Caribbean, as his mother was a native of St. Kitts and his father Jamaican. Growing up, his father was absent from his life.

His mother raised him and his brother, Alvan, alone. She was Black conscious, and she exposed a young Louis to material like The Crisis Magazine, the official magazine of the NAACP.

“I always felt the pain of those that I would read about in The Crisis Magazine, or in The Afro-American or The Pittsburgh Courier, when we would read of the lynchings and the burnings and the castrations and the terrible torture of Black people when White people felt that we had done something improper,” Minister Farrakhan said in Part 7 of his lecture series, The Time and What Must be Done. “And so my heart ached to see our people free; so, I started to look for somebody who would address the concerns of our people,” he said.

When he was 11 years old, he spent a summer at his uncle’s house and saw a picture of a Black man.

“In my house, in Boston, we had pictures on our mantelpiece, one of whom was Queen Elizabeth and King George, and the other was a White representation of Jesus,” he said. “But in my uncle’s home, a Black man was on the wall. That was really strange to me, because all the homes that I had visited as a young man, all the Black homes had a picture of Jesus, a White person.”

Minister Farrakhan learned a little about his family history that summer. He discovered that his father was a follower of Marcus Garvey and that his mother was “on the fringe” of the Garvey Movement. 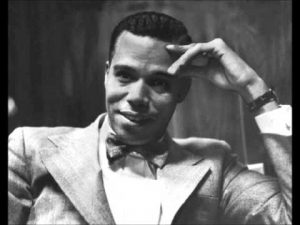 As a “little shorty” at his uncle’s house, he pulled up a chair in order to look at the picture of the Black man closer.

“He’s a man that came to unite Black people,” his uncle told him.

“I asked my uncle, ‘Where is he, that I might go and be with him?’ and my uncle said, ‘He’s passed away.’” Minister Farrakhan recounted. “And the tears fell from my eyes, because I had come that close to what my heart was yearning for, and he was gone.”

“As I walked the street, tears fell from my eyes, and I asked God: ‘God, why didn’t you choose me? You know I love my people…’ And as fast as I made that question to God, the answer came when the brother had told me that ‘God appeared in 1930’ and I was not even born. So I decided I must go and meet this man, and offer him my life,” Farrakhan said.

Aside from his spiritual journey, Minister Farrakhan was an enticing musician and entertainer in his younger days. In fact, crowds have always levitated to him.. Before he joined the Nation of Islam, he was known as “The Charmer.” 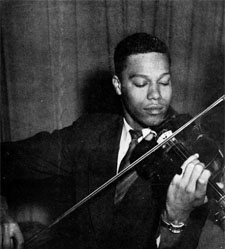 At the age of 22, he was booked as the feature performer in a Chicago nightclub called The Blue Angel. He had married his childhood sweetheart, Khadijah, two years prior, and they were in a cab together when he saw an old friend.

The married couple ended up stopping the cab to join Farrakhan’s uncle around the corner, and Farrakhan’s friends who were Muslim invited him to attend a lecture by the Honorable Elijah Muhammad at the Nation of Islam’s Saviours’ Day convention.

He accepted the invitation and was sat in the balcony, where he noticed Elijah splitting verbs and not using subject-verb agreement.

Elijah Muhammad responded to his thoughts and gave him his first assignment: “Brother, don’t you pay any attention to how I’m sayin’ it. You pay attention to what I’m sayin’, and then you take it and put it in that fine language that you know.” 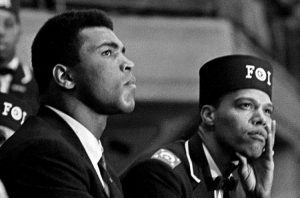 Stay tuned for the second installment on Minister Farrakhan’s early Nation of Islam life. Background information and quotes taken from https://www.noi.org/hon-minister-farrakhan/ and http://www.finalcall.com/artman/publish/Minister_Louis_Farrakhan_9/article_9658.shtml.