Minister Farrakhan turned 85 years of age on May 11. This is the continuation of the third installment of five honoring his life, his journey throughout the Nation of Islam, his mission, his accomplishments and his legacy. 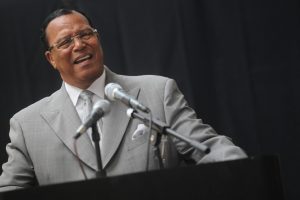 The Nation of Islam began to rise when the scales were removed from the Honorable Minister Louis Farrakhan’s eyes on September 1977.

In between the Minister’s efforts to rebuild the Nation, he had a Vision-Like Experience of being on The Wheel*. On October 24, 1989, he gave a press conference titled, “The Great Announcement,” which conveyed his experience to the world.

“In a tiny town in Mexico called Tepoztlán, there is a mountain on the top of which is the ruins of a temple dedicated to Quetzalcoatl—the Christ-figure of Central and South America; a mountain which I have climbed several times,” Minister Farrakhan said in Part 51 of his lecture series The Time and What Must be Done. “However, on the night of September 17, 1985, I was carried up on that mountain, in a Vision-Like Experience, with a few friends of mine.” 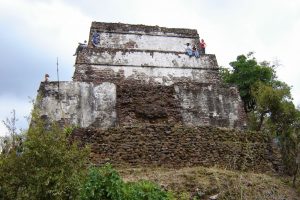 As they reached the top of the mountain, a Wheel appeared at the mountain’s side, and Minister Farrakhan was called to enter it.

“Three metal legs appeared from the Wheel, giving me the impression that it was going to land, but it never came over the mountain. Being somewhat afraid, I called to the members of my party to come with me, but a voice from the Wheel spoke saying, ‘Not them; just you,’” Minister Farrakhan said.

“I was told to relax and a beam of light came from the Wheel and I was carried up on this beam of light into the Wheel. I sat next to the pilot, however, I could not see him—I could only feel his presence. As the Wheel lifted off from the side of the mountain, moving at a terrific speed, I knew I was being transported to The Great Mother Wheel, or ‘The Mother Plane’”.

The Minister’s fear of seeing The Mother Wheel caused the pilot to maneuver his craft in a way that The Wheel was not visible. The pilot then backed into it and docked in a tunnel. He escorted Minister Farrakhan to a door, and the Minister was admitted into a room.

“At the center of the ceiling was a speaker, and through this speaker I heard the voice of the Honorable Elijah Muhammad speaking to me,” Minister Farrakhan said. “He spoke in short cryptic sentences; and as he spoke, a scroll full of cursive writing rolled down in front of my eyes—but it was a projection of what was being written in my mind!”

As the Minister attempted to read the cursive writing, written in English, the scroll disappeared.

“The Honorable Elijah Muhammad began to speak to me again. He said, and I quote: ‘President Reagan has met with the Joint Chiefs of Staff to plan a war. I want you to hold a press conference in Washington, D.C., and make known their plan—and say to the world that you got the information from me, Elijah Muhammad, on The Wheel,’” Minister Farrakhan said. “He said to me that he would not permit me to see him at that time; but he said that I had ‘one more thing to do’, and when that one more thing was done, I could come again to The Wheel, and I would be permitted to see him face to face.” 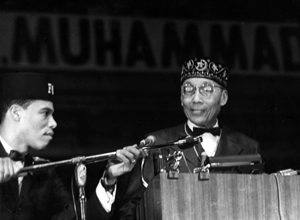 After the Honorable Elijah Muhammad spoke, he dismissed the Minister. Minister Farrakhan reentered the small Wheel, and the pilot moved the craft out of the tunnel, took it to a great height, and maneuvered in a position where the Minister was able to see The Mother Wheel.

In part 51 of The Time and What Must be Done, the Minister said The Wheel then dropped him near Washington, where he proceeded into the city to make The Announcement. His experience then concluded.

“After I awakened that night, that Vision-Like Experience seemed to vanish from my mind. However, on the morning of September 19, 1985, a great earthquake struck Mexico City—on the Richter scale it was ‘8.1’—and it was felt as far away as Tepoztlán, the little town where I was staying,” the Minister said. “The earthquake eventually brought the vision forcibly to my mind; and I spoke it later that morning for the first time to my wife, Khadijah Farrakhan Muhammad, and to Sister (Mother) Tynnetta Muhammad, in the city of Cuernavaca, in Morales, Mexico.”

Although Minister Farrakhan received the information about the war from the Most Honorable Elijah Muhammad, he did not tell him who the war was against or where it would take place. However, as certain events began to take place from September 1985 into January of 1986, it slowly dawned on the Minister that the war could be against Muammar Qaddafi and the Libyan Jamahiriya. He was still unsure.

In early February of 1986, the Minister participated in a Libyan press conference with other organizations and representatives to send a message to the U.S. government: “Hands off Libya.”

“While I was speaking at the press conference, the lights of the television cameras in the back of the room brought back the vision of the press conference that I was to hold in Washington, D.C., and I wondered to myself, ‘Could this be it?’” the Minister said.

Later that month, the Minister embarked on a world tour. Ghana was one of the stops, and while he was there, it all came together – the war President Reagan and the Joint Chiefs of Staff had planned was in fact against Muammar Qaddafi and the people of Libya.

“I decided to alter my planned itinerary to go to Libya and to warn Muammar Qaddafi,” he said. “From Tripoli, speaking before the representatives of approximately 80 nations, I told the vision publicly, sending back to the United States a warning to President Reagan and Secretary of State George Schultz.”

In the Gulf of Sidra, a body of water in the Mediterranean Sea on the northern coast of Libya, there was a confrontation between the United States Air Force and the Libyan Air Force. The Minister said during the confrontation, there were press reports of a sighting of a bright orange object over the Mediterranean.

“The Wheel was, in fact, present and interfered with the highly sensitive electronic equipment of the aircraft carrier, forcing it to return to Florida for repairs,” the Minister said.

“In the article which followed, the exact words that the Honorable Elijah Muhammad spoke to me on the Wheel were found; that the President had met with the Joint Chiefs of Staff and planned a war against Libya in the early part of September 1985.”

“The reason that the Honorable Elijah Muhammad did not tell me who the president and the Joint Chiefs of Staff had planned the war against was because Muammar Qaddafi, the Muslim Revolutionary leader, and the small nation of Libya, was only to serve as a sign of an even more significant and consequential war, which would come several years later,” Minister Farrakhan said.

On October 24, 1989, at the J.W. Marriott Hotel in Washington, D.C., Minister Farrakhan made The Announcement where he warned then president George H.W. Bush, the government of the United States, the Chiefs of Staff, and the wickedly wise. The words he spoke then still serve as a foundation to the work he does today.

“I am here to announce today that President Bush has met with his Joint Chiefs of Staff, under the direction of General Colin Powell, to plan a war against the Black people of America, the Nation of Islam and Louis Farrakhan, with particular emphasis on our Black youth, under the guise of a war against drug sellers, drug users, gangs and violence-all under the heading of extremely urgent national security,” Minister Farrakhan said.

“You may come against me, which you are free to do, since we have no power to stop you, but I warn you … That I am backed by The Power of Allah and His Christ (or ‘Mahdi’ and ‘Messiah’) and The Power of that Wheel in which I received this Announcement!” he voiced.

“And the moment you attempt to lay your hands on me the fullness of Allah’s Wrath will descend upon you and upon America. And before you will be able to establish your mockery of me, if that is what you wish to do for what was revealed to me on The Wheel, you will see these Wheels, or what you call ‘UFOs’, in abundance over the major cities of America.”

He continued: “And the calamities that America is presently experiencing will increase in number and in intensity, that you might humble yourselves to the Warning contained in this Announcement, or be totally destroyed from the face of the Earth. This is a final warning to you. The ball is now in your court. You may do with it, with me, and with us as you see fit. Thank you for your attention and may Allah bless each of you with the light of understanding, as I greet you in peace: As-Salaam Alaikum.” 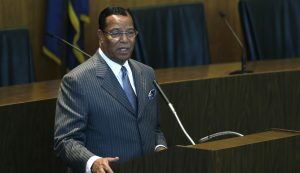 *The Wheel, or Mother Plane, also referred to as a UFO, is a human-built planet, a half-mile by a half-mile. Its science and purpose is taught by the Honorable Elijah Muhammad. For more information, visit noi.org/thetime and watch episodes 51-55 of The Time and What Must be Done lecture series.

Stay tuned for the fourth installment on the annual gatherings Minister Farrakhan has put on. Background information and quotes taken from Part 51 of The Time and What Must be Done.