If there’s one group of people who knows what it’s like to be misunderstood, it’s definitely the Nation of Islam.

From the 30s till today, accusations of anti-semitism, racism and hate-teaching accompany the Nation of Islam. Men and women in the Nation sometimes encounter these misconceptions that people have. Friends and family spew some of the untruths media personalities and newspapers have put out about the Nation and the Honorable Minister Louis Farrakhan.

The desire to clear up these misconceptions inspired a group of seven young men to start a streaming platform that would give them the opportunity to share their truth and the truth of an entire nation.

“The purpose of it was really to create a network where we can showcase our culture and our history in a way where people can have access to it and still be informed and entertained,” said Wali Muhammad, co-founder of NFA Studios.

NFA Studios—or Never Fall Again Studios—just launched in May and has a following of over 1,000 people on Instagram. It’s become a one-stop shop where you can find several video lectures of the Honorable Minister Louis Farrakhan, some of them never released and over 30 years old. Lecture topics range from “Obedience to God” all the way to “Separation or Death.”

Wali Muhammad, along with members of the NFA Studios team, have a background in film and television. Muhammad in particular studied film at Columbia College in Chicago. For several years, he worked in the TV industry on shows such as the Steve Harvey Show and Judge Mathis.

His latest project, NFA Studios, didn’t simply come out of the woodwork. He, along with the brothers he’s been working with for about five years, had been entertaining the idea for three years. 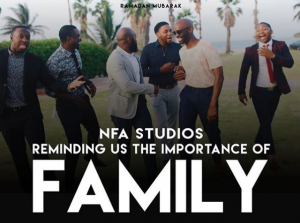 Since they began digitizing his work, they saw a need that had to be met.

“We realized, wow, we really need somewhere where we can showcase our culture to the world and create content and watch shows and have a better understanding of the Nation of Islam and what we represent,” Muhammad said. “It didn’t start off like that. The concept kind of grew from that – stemming from the Minister’s lectures into creating original content.”

The path towards NFA Studios began with a relationship between members of the NFA team and the Honorable Minister Louis Farrakhan. For years, they’ve had the opportunity to film him and will soon release the footage on NFA Studios, Muhammad said. 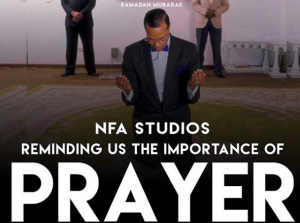 On top of lectures, NFA Studios also offers original content such as a cooking show titled “How to Eat to Live,” a documentary series titled “40 Miles,” and more.

While trying to launch the platform, Muhammad said the team encountered many challenges.

“We tried to launch maybe a little over a year ago and it just wasn’t the right time. Not enough resources,” Muhammad said. “But by Allah’s grace, as brothers and sisters around the [Nation of Islam] started to find out what we had in mind, they started to help us and a team was starting to form. It has really been a blessing to come this far and see where we came from three years ago to where we are now.”

“I think many have been waiting to see something like this come out,” he said. “People can go on YouTube and look up lectures, but you won’t see them organized like they are on NFA. When it comes to original content, having a place where believers can come and share their stories and educate people, it’s just a great thing to have.”

As for the future, the founders of NFA Studios would like to reach the point where they can offer scripted TV shows, movies, and even news segments. There is no limit.

“I would hope that in a few years from now, NFA will be producing shows, TV shows, hopefully movies,” Muhammad said. “Now is really the time. There isn’t a platform out there quite like this.”