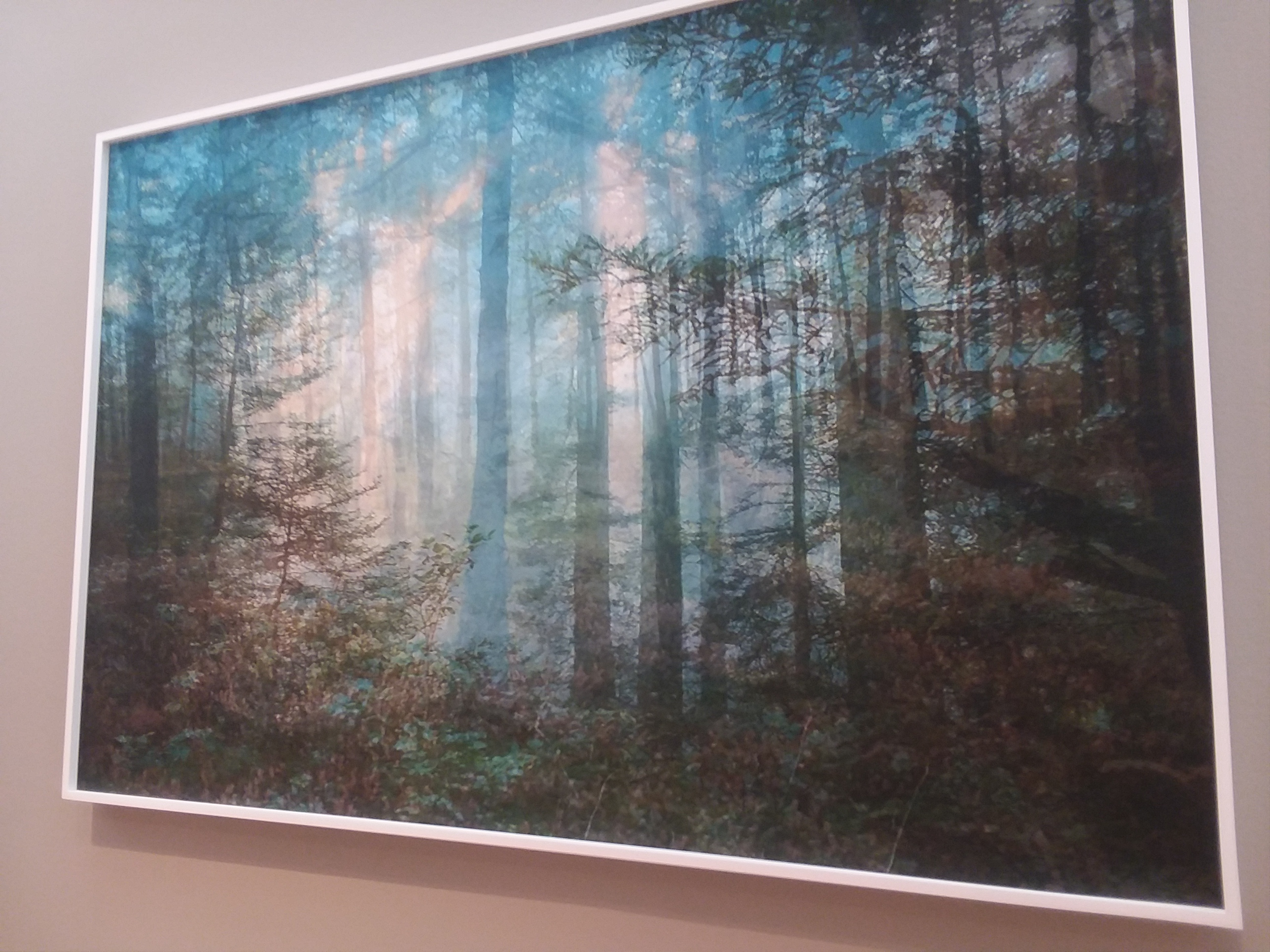 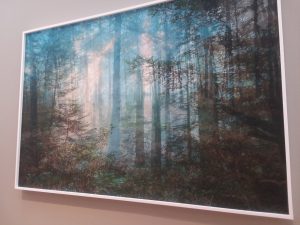 When you go to the High Museum’s website and travel to the current exhibitions page, the first piece of art you see is “Four Years out of a Death Row Sentence” by Amy Elkins. When the “Creative Approaches to Nonfiction” class took a trip to the museum, everybody split into separate circles of social interaction. Like most other museum goers, my circle walked around, looking and browsing. Then, we came across Elkins’ piece. I didn’t recognize it; seeing it in person may have been my first time seeing it, but two individuals in my circle recognized it. “That’s the painting from the website,” they said. For them, seeing the painting as the first thing on the website exhibitions page may have influenced the way they viewed the real painting. They approached it with preconceived notions. For me, however, the painting was fresh; new. They lost interest after about five seconds while I was drawn to it. The painting mesmerized me.

Days after the museum trip, I decided to look for the painting on the High Museum website, and boom; there it was. I discovered that it is not a painting but a photograph of a forest. Branches with brownish-reddish tinted leaves are on the far left and right. Tree trunks stand tall in the middle and on the outskirts. In between the tree trunks and the side branches/leaves combination, a reddish, hazy-like light attempts to seep in. The whole image is blurry, as if covered by spider webs or a willow tree’s wisps. The haze gives the piece a surreal, fantastical feeling, which may be the reason why it comes off as a painting or an artwork of fictional magnitude.

“Freedom shines past the branches that seek to block the light,” I wrote in my journal. When I first gazed upon the piece, I remember feeling a little anxious. It wasn’t fear necessarily as much as it was a sense of foreboding. The photograph gives the feeling of being lost in the woods. The thick fog tries to prevent you from finding your way, but somehow through the haze and darkness, you are able to see and follow the light.

After the initial feeling of unease, I read the plaque on the wall next to the forest. The title is “Four Years out of a Death Row Sentence.” It was after reading the plaque that I understood the circle of freedom and death the piece represented. The trees and branches surround the light, attempting to put it out. The death row prisoner’s path is unclear. Most people don’t know the plight of such a prisoner, and most people will live and die never knowing. I don’t know the plight, but I imagine a man segregated into a special section of the prison and separated from the rest of humanity. He tries to cling on to the thread of humanity, the thread of light, left inside. He uses his spare energy to overcome the darkness of his surroundings. His future is hazy, but he holds tight to the rope of hope and never lets the light distinguish.

His path is likened unto the path of young black people growing up in what many consider “the ghetto.” The ghetto is a special section of a city for people society deems as “criminals.” In his song “New National Anthem,” T.I. talks about the judicial system and the prison system, and he uses his lyrics to illuminate the effects the two systems have on the black “criminal.” He raps, “All the changes the system will take him through / He ain’t a killer but he will if you make him do it / Homicide he’ll ride, they’ll put him on trial / Let him have a life sentence then do it with a smile.” T.I.’s lyrics are able to describe how imprisonment changes a person, especially if the person is falsely accused and subsequently convicted of a life sentence.

The man on death row could be falsely accused. He could have done nine ounces of crack, as T.I. touches on. “Tell me why 9 ounces of crack will get you more than a rape right now?” he poses the question. I can attempt to imagine how the man on death row ended up there, but imagination is not necessarily reality. The plaque that accompanies the picture features words from a “thirty-two-year-old man who had been on death row for thirteen years. He currently remains on death row in the American South.” He knows a different reality beyond imagination. Maybe there is some truth in the imagination, some truth in T.I.’s rap about resisting death, as the man ponders on his childhood. Reminiscing about childhood memories can become a survival mechanism that one uses to hold on to the shreds of one’s humanity.

“Even as a small child,” the man writes, “I always had a love for the outdoors. I took refuge in the nearby woods often.” For him, the image of the forest represents a safe haven. He continues, “One day while witnessing my mother’s boyfriend abuse her, I grabbed my pellet gun and considered shooting him. Instead, I ran off into the woods.” In that situation, the woods served as a way to suppress negative emotion, negative desire, and subsequently, negative action. “It hurt my feelings, how quickly all of the creatures ran for cover,” he writes. He was one with the forest, in his mind, yet the creatures did not recognize him as one of their own.  “I sat down next to some large trees on the side of the dirt pathway in the forest thinking about how things would be when I went back home, about not going back home at all. . . .” Just like the fantastical aspects of the photograph, the forest represented a way of escape.

“I just sat there as the lowering sun, so bright and crisp, created beams of light that reached the ground through the trees all around me,” he concludes. His phrasing is perfect, for that is exactly what the image captures. By the colors used, one can tell that it is late in the day. At the same time, the sun’s rays seep through the forest at the right angles, creating those beams of light the man describes. His imagination and his reality combine into something deeper than the average person can understand. For me, the photograph represents freedom and hope. For him, it may represent his childhood memories of the forest and how he sought out its protection during a time when he needed to escape a negative situation at home.

The little black child growing up in the ghetto has no such escape. The child’s very home is a danger zone, as described by the bleak picture T.I. paints. “Officer, what did I do? / Naw hold up man, don’t shoot, I live over there / Ay, man, what you doing? You trippin, dawg,” he says. The child is either killed or arrested. “And he only 19, he ain’t even had a child / As a child, told his mama he’ll be gone for a while / And she cried, still they just put him inside,” T.I. raps. Many people feel a sense of comfort in erasing the humanity of the prisoner. Many don’t realize that it only takes one bad decision, one life-altering moment, one black birth, to be labeled a criminal and to be locked away for life or get a death row sentence.

The amazing thing about art is individuals see it through the lens of their personality, memories, and experiences. In that sense, everyone approaches art and life with preconceived notions. Some of us walk away at first glance because we saw the piece of art online or because we let the biases of other people influence the way we heard a song. Some of us are mesmerized and seek to gain a deeper insight. Some of us stand in front of a single piece of artwork or listen to it for a long period of time, soaking in every detail. Finally, some of us know every square inch of the piece and what it is trying to communicate because we have lived it.