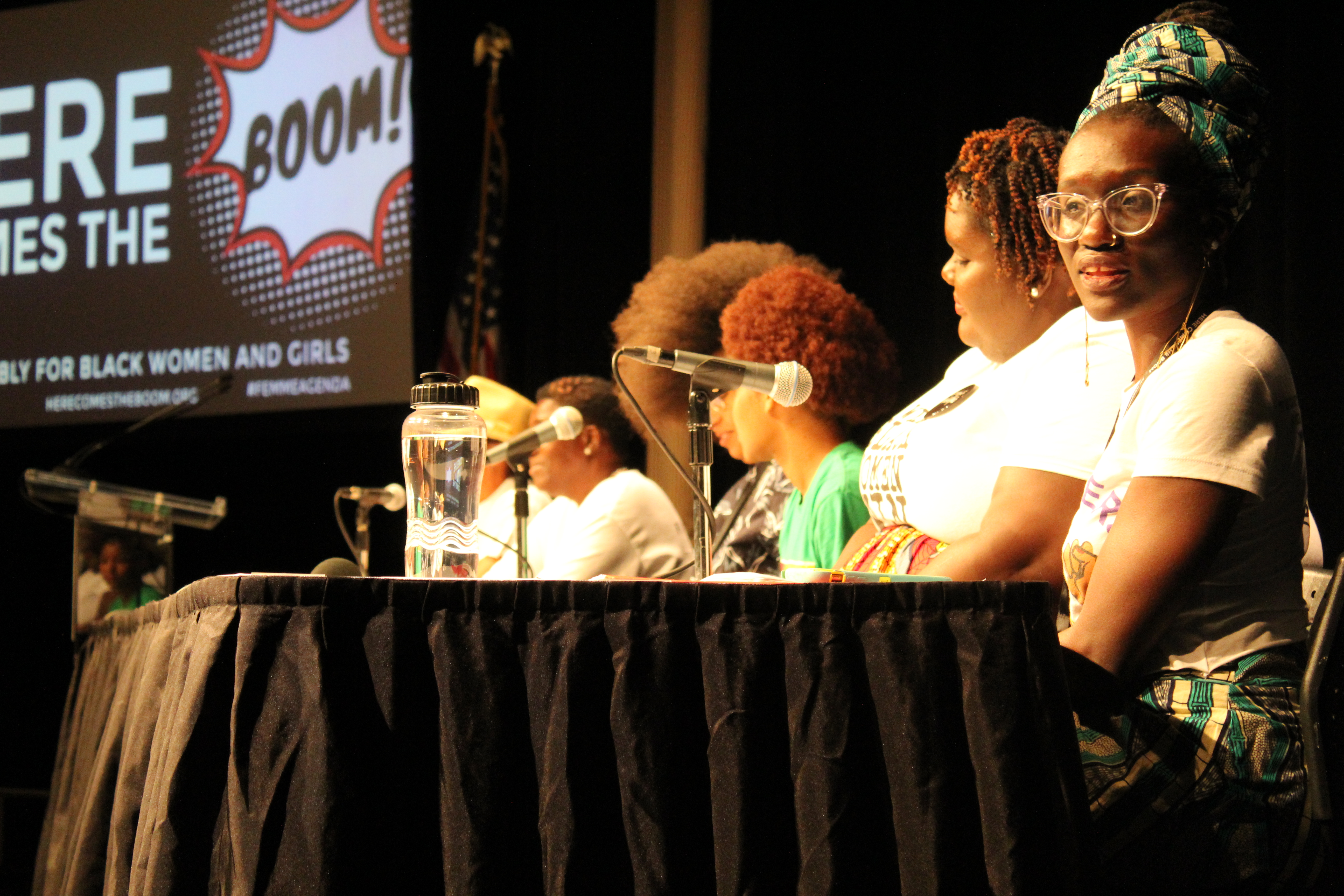 Ever since last year’s 2017 election in Alabama, where Black women turned the vote away from Republican Roy Moore and towards Democrat Doug Jones, there’s been a lot of talk about the political power Black women hold. In fact, publications have credited Black women with being an incredibly powerful force behind elections.

Black women in Miami are owning that description. Last September, they organized the Black Women’s March where they brought awareness to issues such as sexual assault, and trauma that Black women face. Then, last month, they organized Here Comes The Boom, an assembly for Black women and girls that would be the beginning stages of creating a political platform.

The event lasted just about all day, with panels that explored issues such as the criminalization of Black women, voting, and how to harness your political power.

According to Jasmen Rogers, one of the event’s organizers, the end goal was to teach Black women about their political power and to effectively make their voices heard by local politicians.

One of the unique aspects about Here Comes the Boom was it’s focus on young Black women girls. It was an assembly within an assembly – one for Black women and another for the current generation.

Soul Sisters Leadership Collective, a nonprofit organization based in New York and Miami, helped to lead the effort to organize the youth assembly. Wakumi Douglas, the executive director of Soul Sisters, said it’s important to get youth involved with politics now.

Logan Meza, who was on the planning committee for the youth assembly, said the greatest challenge was putting the workshops together in a way that youth would be interested.

“To just sit up here and go through the list of, here’s this person running for office and here’s this and here’s that, and a 35-page ballot, people lose interest,” Logan said. “So, the biggest challenge was trying to find ways to make it interactive and engaging for young folks so they can be very passionate and excited about exercising their political power and encouraging their friends to do the same.”

Logan and the youth planning committee organized two interactive workshops for youth. One was a simulation of how voting works with political figures such as the mayor and officers. The other workshop was an interactive jeopardy game where participants could win prizes.

Logan said it’s important for young people to learn about their political power, even if they can’t vote yet.

“Young people can change the entire way that an election goes, but it’s like they don’t know that yet,” Logan said. “So it’s just really important to show that there are other ways to show your political power because you may not be able to vote yet, but you can do a sit-in or a walk-out.”

Destiny Delancy, 17, said she attended because a friend of hers extended an invitation. She said it was an exhilarating experience.

“I’ve loved every minute of it, just seeing my culture,” she said. “Because I’m usually one of many other Caucasian women and other people. Like, just this past year, I did a ballet piece and I was the one Black girl out of the few Caucasian women, so it’s just amazing seeing everyone of my color, who looks like me, who can speak on my level with me.”

Dymon Smith, also 17, said her experience was everything she expected it to be.

“Just seeing all of this Black power and Black excellence and just Back essence here, I’m proud to be here,” she said.

Dymon goes to the same arts school Destiny attends and said there’s not many other Black students who attend the school.

“There’s not many Black kids there to experience and educate us on the Black culture that we need as youth and to make change,” she said.

Destiny believes it’s important to get young Black people to the polls. Her school recently got all of the students pre-registered to vote.

Francesca Menes, who works with elected officials around policy issues and connects them with community organizations, said if young people don’t participate in voting, they won’t be looking after their future.

“18 to 25, their generation is one of the largest ones,” Menes said. “So if they’re not engaging in voting, they’re kind of handing it off to people who ain’t gon’ be here that long, I’m just gonna be honest with you. And so if the youth don’t engage, the things that they’re going to need for the future won’t exist because they haven’t been actively participating in the process.”

The women behind Here Comes The Boom will continue to help Black women and girls harness their political power to help bring about a change within their communities.