It doesn’t matter if the terrorist is White, Black, Asian or Hispanic.

It doesn’t matter if the terrorist claims to be Muslim, Christian, Jewish, atheist or agnostic.

It doesn’t matter if the terrorist was made in America or the Middle East.

Terrorism has a culture.

The terrorist believes what he or she is doing is morally correct.

The terrorist is often one who justifies the wrong he or she is doing.

The creed of the terrorist: greed, desperation, fear.

Greed, because the terrorist is one who claims other countries have weapons of mass destruction to justify a war where the real goal is to obtain those countries’ natural resources.

Desperation, because the terrorist is one to turn to mass genocide to preserve his or her own way of life.

Fear, because the terrorist is one to shoot down an unarmed teenager claiming that he “feared” for his life.

The system of the terrorist:

3. Preach freedom while simultaneously inhibit others from attaining it. In other words, masquerade as the freedom fighter. It’s important to make the public believe that you are on their side and that you fight for their causes.

Of course, to successfully adopt the system of the terrorist, one must be in a position of power or control.

Not saying small-time terrorists are nonexistent. They, too, live within the creed of the terrorist.

Just ask the man that shoots another man down out of the greed to obtain a pair of Nikes.

Just ask the man that violates a child out of his own desperate need to feel some type of love.

Just ask the man that beats his wife out of fear of her leaving him. 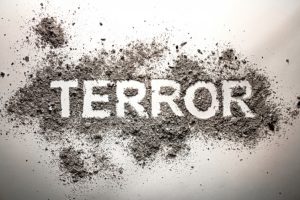 Which brings us to the caste system of the terrorist:

At the top of the food chain, this terrorist is master of manipulation and mass genocide. Examples include the ruling body of the American government.

In positions of local power, this terrorist is not capable of mass genocide, but instead upholds the creed by acts such as burning buildings and lynching local citizens. Examples include groups like the Ku Klux Klan.

The terrorists in this group feel they don’t have much power or control over their own lives, and so they obtain satisfaction from ruining the lives of others. Examples include rapists and murderers.

At the bottom of the food chain, the common terrorist lives a life of negativity. He or she may often have uncontrolled feelings of envy and jealousy. The terrorists in this group are more likely to terrorize via words than actions. Examples include liars and scandalmongers.

Yes, terrorism comes in all shapes and sizes.