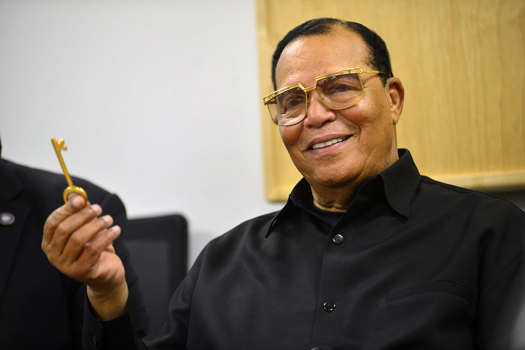 “O you who believe, when an unrighteous man brings you news, look carefully into it, lest you harm a people in ignorance, then be sorry for what you did.”

The crazy thing about this is that it was never said. There is no full quote of The Honorable Minister Louis Farrakhan saying, “Judaism is a gutter religion”. The media has done such a wonderful job of introducing this falsehood to the public and has kept it in rotation for decades, yet the remark was never made in the first place. So where did it come from?

In 1984, Minister Farrakhan criticized the state of Israel for the absence of peace in that nation due to their immoral and unjust practices in the name of God. Former Wall Street Journal editorial writer Jude Wanniski wrote a memo in 1997 that explained that she had an email exchange with former New York Mayor Ed Koch. He had challenged the Minister’s alleged statements after vocalizing his disapproval of Jude Wanniski meeting him. After she passed the request to Minister Farrakhan to explain himself, he responded in a letter that once again clears up any and all confusion. In this letter, he states the following:

“Regarding the state of Israel, I said in 1984, “Israel has not had any peace in 40 years and she will never have any peace for there can be no peace structured on lying, murder, and injustice, using the name of Allah (God) as a shield for your dirty religion.”

“Countless times over the years I have explained that I never referred to Judaism as a dirty religion, but, clearly referred to the machinations of those who hide behind the shield of Judaism while using unjust political means to achieve their objectives. This was distilled in the New York tabloids and other media saying, ‘Farrakhan calls Judaism a gutter religion.’

“Over the centuries, the evils of Christians, Jews and Muslims have dirtied their respective religions. True Faith in the laws and Teaching of Abraham, Jesus and Muhammad is not dirty, but, practices in the name of these religions can be unclean and can cause people to look upon the misrepresented religion as being unclean.”

There is some truth to this, but it is still not accurate. I am sure that many of us have heard and read about Minister Farrakhan using the term “Satanic Jews” before. However, we should know by now that context is very important. Truth mixed with falsehood can easily be used to mislead the people. The media so mischievously takes small clips of the Minister out of a two or three hour lecture in order to label him as anti-semitic. Using the adjective “satanic” describes a specific group of so-called Jewish persons who are malicious and wicked in their practices differing from the true teachings of Moses. It is not to smear the name of every Jewish person in the world. As presented in the above letter from Minister Farrakhan, there is obviously a distinction between those who are following the righteous ways of Allah (God), and those who are not.

In the Bible, Jesus is arguing with a particular group of Jews who seek to kill him. Jesus makes a point that if they were of God, and if they were the children of Abraham, then they would do the works of him [John 8:39]. You cannot claim to follow a man who is said to be the Friend of God while practicing wickedness in his name. Those Jews were following a religion different from that which they say they came from. They claimed to be of a righteous man, yet Jesus identified them as not of God, but of the devil [John 8:44-47]. He was certainly not calling Abraham or Moses “the devil.” Why would a man of God denounce the followers of highly respected and honored prophets unless those followers are not living up to the names of those men? It is in this spirit that Minister Farrakhan comes. If it is such an issue when the Minister makes this distinction, then should we call Jesus anti-semitic? The bible recognizes the deeds of “so-called Jews” who say they are one thing, but act another way.

The scriptures in Revelations 2:9 and 3:9 mentions a “Synagogue of Satan”, comprising of those who say they are Jews but are not. The Honorable Minister Louis Farrakhan further explained who makes up the Synagogue of Satan, and who does not fit the category, in his The Time and What Must Be Done Lecture Series, in Part 20 :

“The Synagogue of Satan” is comprised of Jews and Gentiles who are in rebellion against God:  His Statutes, Laws and Commandments, His Will and His Way.  And it is these so-called Jews who are giving “a bad name” to the righteous Jews who are practicing the teachings that Moses and the Israelite prophets have given them, that they have received and are trying their best to show their gratitude to Almighty God for having made them to excel the nations.”

Minister Farrakhan is always right in line with the scriptures. If more time was taken out to read the Bible from which his point came, and less time trying to post sound bytes on the internet in order to slander this man, then maybe people would gain a better understanding.