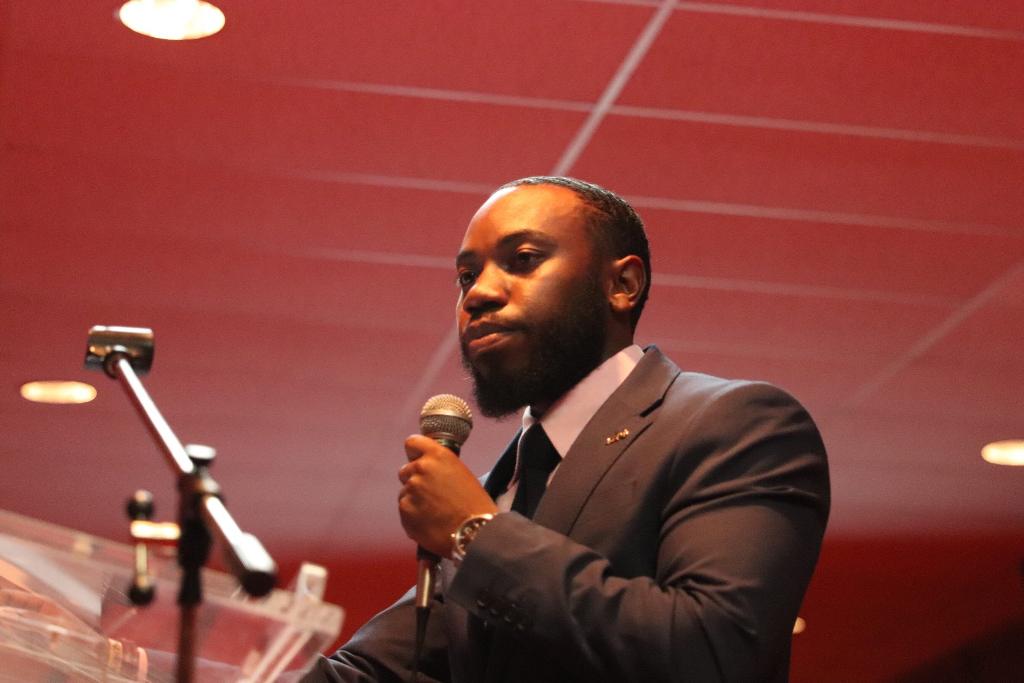 His power became evident as a college student at Texas Southern University. In 2014, he took his activism and ran with it.

When a university president painted over the school’s murals and called them “ghetto”, Kaleb didn’t turn a blind eye. When new students didn’t have anywhere to sleep because that same university president didn’t inform them that housing was limited, Kaleb didn’t shrug it off.  Instead, he started a movement called “Take Back TSU” and eventually ousted the unfit president. Then, he helped to get them a new one.

Kaleb is ready to change the world.

At TSU, Kaleb was immersed in the history of the African-American experience. One of his classes dealt solely with that topic. He didn’t know how much the class would have an effect on him.

“This was kind of around the same time that I was still just realizing the gravity of how Black people have gotten to the oppressed state that we’re currently in,” he said. “And as I was learning all of this, we still see the same manifestations of white supremacy today with the killing of Mike Brown and the non-indictment of his murderer Darren Wilson.”

In this class, Kaleb learned more about the history of struggle black people have experienced for centuries. It sparked something in him.

“That spark was kind of like that tipping point that I learned enough, so now it’s time to do something about it.”

Kaleb had a burning passion to change the oppressed condition of black people, and you can hear it in his voice when he speaks. The passion and sheer authenticity flows easily in his words. It’s likely because Kaleb has had that passion running through his family for generations. He has a family history of being involved with advocating for others.

“My grandmother was actually arrested in Galveston [Texas]  in a very Rosa Parks fashion. She refused to sit in the back of a segregated bus in Galveston and she was arrested,” he said.

Just like family members who came before him, Kaleb had the desire to be the change he wanted to see. This led him to the idea to host a march. Immediately, he asked his African-American Literature professor for help.

“I said I wanted to do a rally or something and she put me in contact with a slew of community activists and a wealth of elders and people who just been kind of doing that work,” he said. “Brother Jesse and Brother Deric were two people they put me in contact with. And God revealed to me that was my calling.”

Under the wings of mentors

Deric Muhammad, among many other things, is an advocate for the Black community and motivational speaker in Houston, TX. He’s a mentor and hosts many free events geared towards improving the condition of the black community.

Kaleb contacted him soon after receiving his information from his professor. That night, Brother Deric got back to him and they met the next day.

“He gave me all the support that I needed as far as how to go about everything…so how to go about finding out the resources that I needed on campus to reserve the space, provided me with community partners that would be willing to speak, or to provide guidance and he kind of just put me under his wing as a mentor,” he said.

Kaleb said those two men were his first introduction to the Nation of Islam, besides reading the Autobiography of Malcolm X. He said they were very warm and welcoming.

“Besides my father and maybe a few uncles, I never had male mentors or males to just take so much time and care to my development and they didn’t know me,” he said. “It was never an effort to try to persuade or convert me, it was just they saw that I was passionate about black people, they were passionate about black people and they gave me the tools to be successful and so, just their kindness inspired me to come to the mosque. Like, let me come see what this is about because I like what it’s producing. So I’m very appreciative for those guys.”

Flying on his own

One of the things Kaleb learned from Brother Jesse and Brother Deric is history he had never learned about. This was something he felt he had to share with those around him.

“Me and a few of my friends, we got involved in activism and started a free community black history class called Roots,” he said. “We partnered with our local church and did that. We started a radio show where we talked about issues affecting the black community from a millennial perspective.”

History was something Kaleb continued to look into. After hosting his own march and supporting many others, he began to see that much of what he and other activists were doing was down the same line.

“I was like, everybody’s saying the same thing, yet we’re still seeing the same results,” he said. “Also, just going to different community organizations like the NAACP, The National Black United Front and seeing articles from the 1990s, 1980s of them marching against unfair housing laws, against unfair education and I’m looking at it’s 2014, ‘15, ‘16 and we still fighting for the same things. So the definition of insanity is doing the same thing over and over again and expecting a different result and so there has to be something different.”

Kaleb found something different when he attended “Justice Or Else!” in 2015, a gathering promoting unity and change in Washington, D.C., hosted by the Honorable Minister Louis Farrakhan.

“I can’t help but to credit the Minister for opening my eyes to the power of economics,” Kaleb said. “When you look at the Jewish community, Asian communities, you don’t see them marching against injustice. They just don’t do it because they’ve come to understand that this country moves off of two things, that’s war and economics — war and money. And so understanding that was kind of the process of me realizing that marching has its place but it’s not the key to our freedom. Economics has to be the key.”

Following the path to black economics

As Kaleb prepares to head to Howard School of Law in the Fall, he’s getting his mind ready for the kind of work he wants to go into.

“I’m a black kid from very humble beginnings living in the United States, so I feel like I need as many tools as possible to reach as many tables as possible. I think having a law degree opens up doors as a qualifier. My biggest concern is obtaining the capital necessary to transform my community.”

A law degree won’t only qualify him to defend his people and speak on certain topics, but it could also open the door for greater opportunities.

“We have to get to the point of instead of begging grocery stores to eliminate food deserts or begging people to put affordable housing in Black communities or begging people to just address the various inequalities we face in our communities, just do it ourselves,” he said. “It’s one thing to go and beg for a grocery store, and it’s another thing to gather three or four investors and just build it yourself and make it profitable for your people. I think having a law degree opens up those doors to be able to do those things.”

Kaleb not only wants to unite the black community in the United States of America, but also all over the world. He’s been able to travel to Europe, Africa and the Caribbean, and has seen the black condition within each of these areas.

He said indigenous people within other countries are facing the same issues blacks in America face, such as economics and gentrification.

Using your power as a student

College students often spend a lot of time trying to figure out the direction in which to take their life. They’re typically concerned with homework, studying and the various other issues that may be going on in their lives. Even with that, college students have a greater power that some of them have yet to tap into.

Kaleb said to start with your local politics if there are changes you’d like to see made.

“The biggest effects that can be felt dealing with politics is going to start with your local politics,” he said. “So your city government. Your county government. Getting involved and knowing what’s going on on that level will be a lot more beneficial.”

He said the first step you can take is to find out who your representatives are.

“If you Google search ‘Who’s my representative’ and you put in your address, it’ll give you all of your local councilmen or aldermen,” he said. “It’ll give you all of that information. Find out what are those people’s platforms, what are those people’s policies, and how does that affect people of color. How does that affect Black communities where you are? If they don’t line up, then call that person to task. Set up meetings with them. They’re more likely to listen to you because the elections are smaller. You have a bigger voice on a local level than you do on a national level.”

Kaleb Taylor is an example for college students and youth all around the world. Cut out excuses, find your path, and continue to grow and evolve. That’s what led Kaleb to put himself in the position to be a changemaker.

“Black people…we have so many divisions between us, where we have no divisions but we create them. If we dont row together, we’ll sink together,” he said.