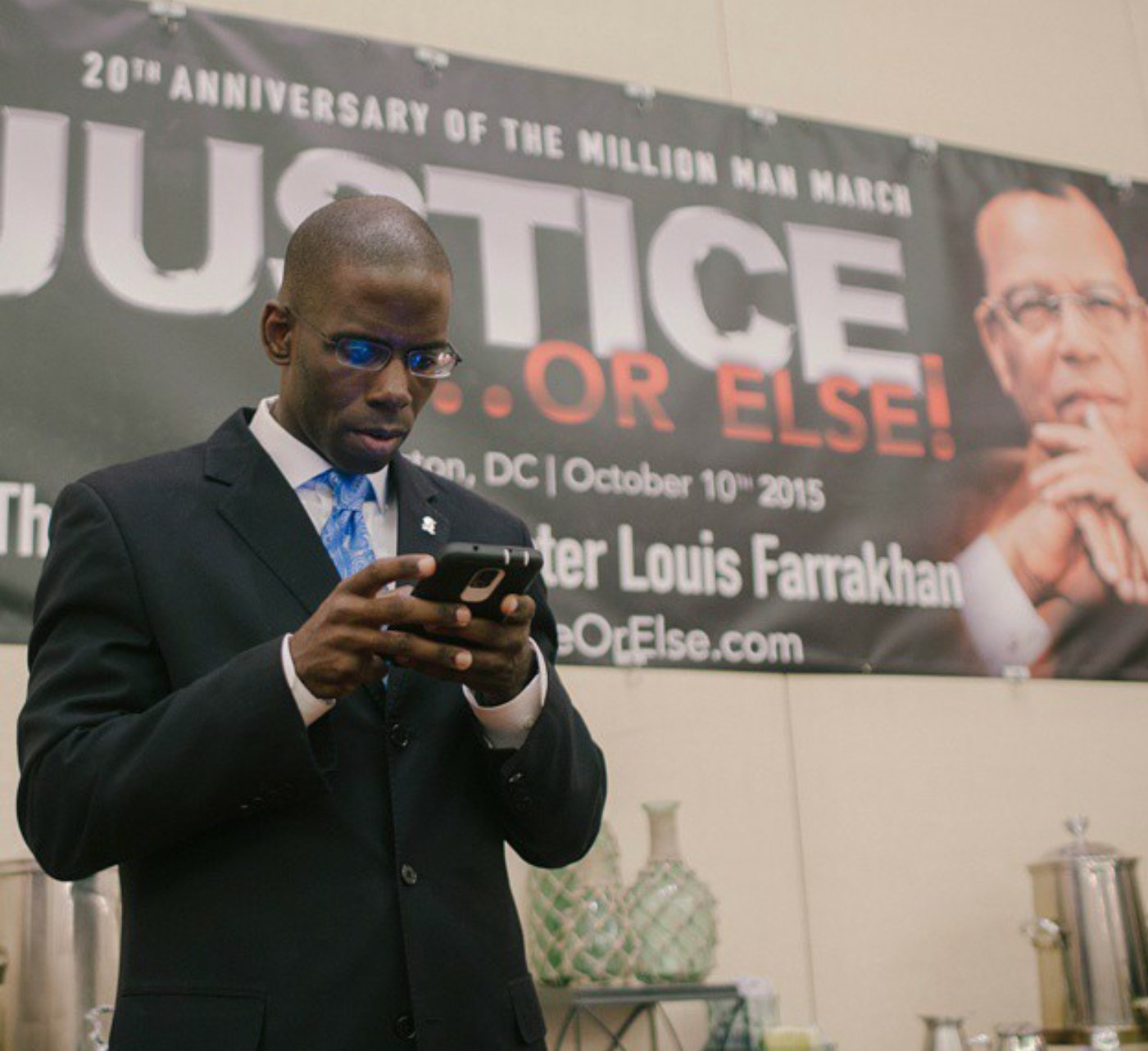 This is a continuation of our cover interview with Brother Jesse Muhammad. Read Part 1 at http://joshuastruth.com/2019/09/04/brother-jesse-muhammad-bold-work-with-a-bold-purpose/.

The Farrakhan Twitter Army has been a force on social media since 2013. With truth as their weapon, members go to war with those who spread misinformation about the Honorable Minister Louis Farrakhan.

Brother Jesse Muhammad has been at the forefront of the Army, so many people credit him with its inception. However, he’s quick to tell anyone that the idea of it came from the Minister.

“The name ‘Farrakhan Twitter Army’ came about during a blessed 2013 phone conversation within the first three months of [Minister Farrakhan’s] monumental YouTube series, ‘The Time and What Must Be Done’,” he said. “In that phone conversation, Minister Farrakhan said, ‘Brother, it looks like we have an army growing on Twitter.’ I replied, ‘Yes sir!’ Then he said, ‘Yes, a Twitter army backing up Farrakhan.’ That is when we started using the hashtag #FarrakhanTwitterArmy!”

Since then, the Army has grown. Its moved against opponents — but also moved towards the betterment of its members.

“I thank the Honorable Minister Louis Farrakhan for being the head of The Farrakhan Twitter Army, which it has served as a historic digital force of service to him, our Nation, our people and the whole of humanity,” Brother Jesse expressed. “I thank him for everything he has poured into cyberspace including spending countless hours answering over 5,000 questions on Twitter and Facebook.”

From Digital to Print: The Teachings 2.0

Brother Jesse’s online work led to publishing The Teachings 2.0: Twitter Book Volumes 1 and 2, which are compilations of the Honorable Minister Louis Farrakhan’s answers to questions posed on Twitter.

The idea came about after Minister Farrakhan spoke to Brother Jesse via phone in 2012.

“After nearly a year of being on Twitter and answering so many questions, he said, ‘Brother, it looks like you have an encyclopedia on your hands,’” Brother Jesse said.

“Minister Farrakhan has the keen ability to give direct orders but they are couched in gentle, loving suggestions. I later reflected on the compilation of the Hadiths of Prophet Muhammad (PBUH) and said to myself, ‘We must put these tweets in book form!’”

“During Saviours’ Day 2019 weekend, Minister Farrakhan even said that just with the responses contained in Volume 2, we could ‘teach the people for years to come when he departs,’” he said.

After releasing the first volume, Brother Jesse did a tour, where he visited over 60 cities across the country. He is now doing a tour for the second volume and has several stops in the coming months.

Defending The Honorable Minister Louis Farrakhan On and Off Social Media

“In the midst of another wave of online attacks against him, the Honorable Minister Louis Farrakhan tweeted on March 13, 2018: ‘The Honorable Elijah Muhammad said to me, ‘If the enemy took out a full page ad in the New York Times, and cursed me out word for word and line by line, they would only help me.’ As it was with my Teacher, so it is with me. The more they knock me, the more I am boosted, by the Grace of God’,” Brother Jesse said.

Soon after the ban, he received a phone call from the Minister.

“A few days after Minister Farrakhan’s pages were permanently removed from Facebook and Instagram on May 2nd, I was blessed to receive a phone call from him,” Brother Jesse said. “He had joy in his voice and said, ‘Oh brother, I hope the Nation (of Islam) will take advantage of the blessing that Allah has once again dropped in our lap!’ He then said, ‘Brother Jesse, if they were not doing these things then that would mean that you and others were not doing your job. This is just the beginning phase of what they are planning against us’.”

The Minister gave a lecture at St. Sabina Church in Chicago, IL, where he spoke about the ban. Many of the words he spoke stuck with Brother Jesse, including when the Minister said, “This is just the beginning, banning me from a social platform.”

“So, what does this mean?” Brother Jesse said. “We have not been relieved of our duty to spread and defend the truth no matter how many of us they ban. We must not let our personal pages go dormant, stay active! Stay on the offense and keep posting content. No matter if you have 10 followers or a million, we have to keep engaging the masses with truth with our posts, especially that which has been given to the Most Honorable Elijah Muhammad. His messages give insight into all of the technology that we see and use because what he received from God in Person is not an ordinary operating system or algorithm.”

Brother Jesse continues to encourage followers of the Honorable Minister Louis Farrakhan and others to continue posting the Minister’s content online. He points to words from Part 14 of “The Time and What Must Be Done”, where the the Minister  said, “I think we should strive to fill the airwaves of the social media, or the internet, with intelligent discourse rather than the vanity and useless foolishness that is constantly being used on the internet, on Facebook, on Instagram, and on Twitter pages. I would also like for the ministers of the Honorable Elijah Muhammad, under my leadership, to respond intelligently to the people who are raising questions—even those who doubt the Truth of what we are saying, and are exclaiming their vitriol and bitterness to what they are hearing from us. But never, ever, should we go “down in the gutter” with those who choose to go there.”

These same principles also apply off of social media — when Brother Jesse is in the streets of Houston.

He and a group of F.O.I go to the worst parts of the city, events, and more to spread the Life-Giving Teachings of the Most Honorable Elijah Muhammad through the Final Call Newspaper. He started posting pictures of it on social media to inspire others to either start doing the same, or continue to. He spread it with #TruthTrafficking, which is a term he first heard from Brother Ashahed Muhammad in Chicago.

“When most of us hear the term trafficking, something of an illegal nature comes to mind. However, we’re focused on trafficking that which taps into the true nature of the human being: Truth,” Brother Jesse said. “From the tweets to the streets with The Final Call Newspaper, we’re a part of a righteous ring of hope dealers taking advantage of every opportunity we can to impart truth to the masses. You all know I love technology but I cannot go too long without hitting the Southeast Houston streets with my Fruit of Islam brothers, Linton Muhammad and Chad Muhammad, to push on the corner and knock on doors. I love being a truth trafficker.”

Touching the Next Generation

Through everything he has done, Brother Jesse has been able to reach the youth in a way that only he can.

“I know I am just a vessel and if I can touch any young person–whether in the mosque or the streets–I know it is only by Allah’s Permission and Power,” he said.

Serving young people is his way of showing gratitude to Master Fard Muhammad, The Most Honorable Elijah Muhammad and the Honorable Minister Louis Farrakhan.

“Those three breathed life into me, so I am obligated to do whatever I can to do the same for others. May Allah continue to bless, protect, guide, and strengthen this generation whom Minister Farrakhan said is born for The Messiah,” he said.

His advice for young Muslims mimics Minister Farrakhan’s answer to a Twitter question, which can be found on page 44 in Volume 1 of The Teachings 2.0.

The question was asked, “What was the best advice you gave to your children when they were young? Grandchildren?”

The Minister replied, “The best advice is found in the words of Solomon where he advised young people to believe, follow and commit to their Creator in the days of their youth. Unfortunately, many of us live to get old before we finally submit. But if young people realize how important it is to submit to God in their youth, then their lives will be a great and productive life for the good of self, family and our people.”