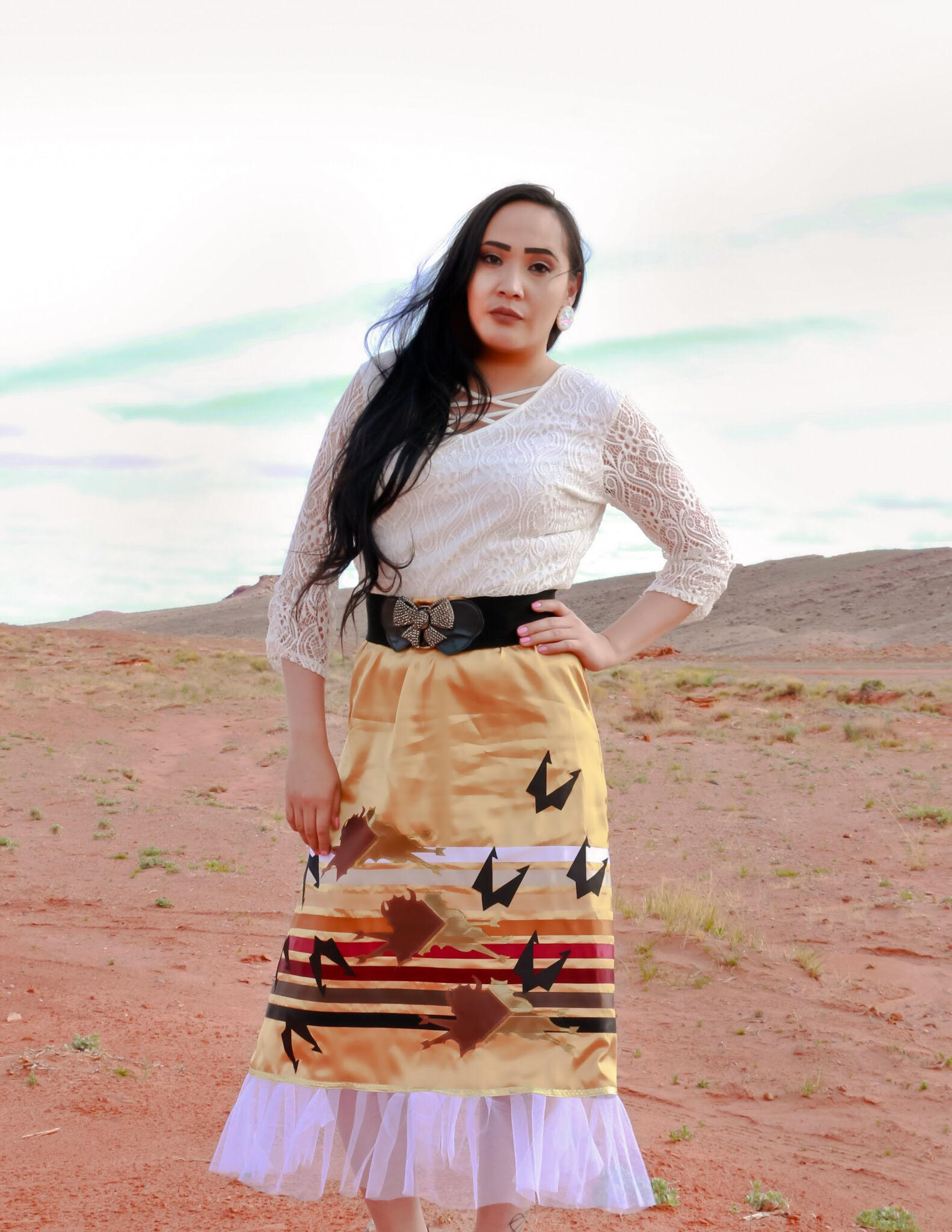 A strong identity gives a person strength, courage and something to fight for. This is what Kelly Holmes, founder of Native Max Magazine, possesses.

As a Native American woman, Kelly walks strongly and boldly, despite living in a society that doesn’t hold Native American history as sacred. Knowledge of her roots keeps her grounded and helps her to understand her purpose going forward. Whether it’s through modeling or publishing her magazine, Kelly carries her heritage with her during each move that she makes.

Growing up on the Cheyenne River Reservation in Denver, Kelly didn’t see anyone who looked like her in fashion magazines, TV shows, movies or other media forms.

“Yes, there were other models of color in the fashion magazines and catalogs that I subscribed to, but none had my unique features,” she said. “I wasn’t able to fully connect, but I still saved clippings on a collage for ‘outfit-inspo’ because where else was I going to find Native American models wearing clothing designed by Native American fashion designers?”

Kelly expressed herself through many creative outlets, two of them being modeling and fashion.  Her interest in modeling began to grow, and Native American fashion designers became familiar with her.

“I was a young girl who was interested in modeling and fashion designing but I couldn’t find anyone to work with or who would feature me,” she said.

All of that changed in 2007, when she landed her first opportunity — her very first photoshoot.

“At first, it was a nerve-wracking moment, as I was extremely shy and bashful at the time. I also had low self-esteem and low self-confidence,” Kelly shared.

After the shoot, she took a look at her photos and said she was blown away by what she saw.

“I didn’t recognize the girl in the photos,” she said. “I thought to myself, ‘she’s so poised and fearless. That can’t be me.’ And ever since then, I pursued modeling. I modeled for years ever since, having done runway, commercial, fitness, and promotional modeling.”

Kelly took a brief hiatus from modeling to tend to her newborn son, but she got back to it in 2011. However, when she returned, the discrimination she faced before hadn’t gone away, which frustrated her. This propelled her to take action.

“I decided to create a platform for other Native Americans who don’t get featured or showcased, like myself and my situation,” Kelly said. “I decided a magazine because, well, at the time, it was something that really [didn’t] require much to start. I also idolized Vogue magazine and Latina Magazine and thought, ‘well why not a magazine? Every month we’d have a shiny new board to showcase stories on.’”

Thus, in 2012 at just 20-years-old, Kelly published the first issue of Native Max Magazine. The magazine is the first of its kind within the Native American community and has featured many prolific people on its covers. With over 10,000 followers on Instagram and even more offline, the magazine has won awards and expanded over the years to include brands, events and more.

Even with all its success, starting a magazine definitely wasn’t in the initial plan for Kelly.

“I never dreamed of having a magazine,” she shared. “If you told me I’d own a magazine to a 6-year-old me, I certainly wouldn’t have believed you. I remember thinking of becoming a veterinarian because I loved animals, especially horses and dogs. Otherwise, I’d probably have been a writer as I loved writing.”

Kelly is proud of her Lakota heritage. Every day in her household, she and her mother speak Lakota to each other to keep the language alive.

She credits her mother and grandmas for instilling in her strong qualities.

“I believe they help me be more resilient,” she said.

Her family passed the knowledge of her roots to her. She knows the exact place her ancestors lived before colonization.

“I know our Lakota traditions, culture, customs, and language; I even know our creation story. They were never meant to survive and be passed down generations,” she said. “It’s a beautiful feeling to know about my culture and heritage. It’s priceless knowledge I can pass onto my children.”

“Sometimes they’re called ‘Reservation Royalty’ or ‘Grand Chief’ or whatever. My thoughts on them are that they’re disrespectful and demeaning to us. They’re making light of the mass colonization and attempted erasure placed on our people,” she said.

She sees those instances as a mockery of Native American culture and customs.

“It’s infuriating when I’m out at a Halloween event with my young children [and] a young intoxicated woman or man is dressed in a Native American costume doing war hoops and ‘dancing around a fire’,” she said. “It ultimately shows my young children and any besides mine that it’s okay to dress like this and make fun of a whole group of people, a whole demographic.”

Using Her Platform as a Means of Change

Native Max Magazine has been a means of change both mentally and physically. In 2015, Kelly told BuzzFeed that when she first started telling people about her idea to have a fashion magazine, people laughed at her.

“When I tried getting into fashion in Denver, people would often say things like, ‘What do Native Americans know about fashion, or even the world?’” she told the outlet.

Many said that Native Americans were “too closed-minded for fashion because of the reservations”.

However, with seven years of business, Kelly has changed that ideology within her community. She’s also gotten her brand involved with social movements. Earlier this year, she and her magazine got behind the Indigenous Peoples’ March, which brought issues people of indigenous blood all over the world suffered from. She used her platform to be a voice for the movement, including to help feature and promote it.

“We need social movements Iike these to help educate the public,” she said. “We’re also able to come together and brainstorm. I love sharing our ideas and virtues that we have at the magazine.”

She hopes her magazine and journey are sending a strong message to Native youth.

“I like to think Native Max Mag is showing Native youth that anything is possible,” she said. “I hope they see themselves represented on a huge platform and will be able to find the courage and confidence to pursue their passions as I did.”

One of the things Kelly hopes for Native youth is that they can share their stories without having to face the kind of discrimination she did.

“When I was a Native youth, I didn’t have any of these opportunities or anyone to share my story with,” she said. “I also want to make an impact on the fashion and multimedia worlds, that we’re able to tell our stories our own way.”

The journey isn’t over

Through her magazine and the work she does, Kelly carries the weight of her people on her shoulders.

“I’m expected to represent our people, stories and struggles in the most respectful and honest ways. It’s also tricky because I’m constantly judged and compared to others. And a lot of expectations about my choices on how I live and dress stem from colonized teachings that were forced on our ancestors in boarding schools,” she said.

Kelly uplifts young Native Americans that may not see themselves in the media and fashion industry by ensuring that the industries are diversifying faster than they were a decade ago.

skin and unique features. You are close to your culture and you know who and where you come from,” she said.

“You are also resilient and strong. You don’t have to pay for any of that. Even when you are not accepted for who you are, don’t be discouraged. Instead, take that as motivation to start your own platform and pave the path for others.”

October’s issue of Kelly’s magazine featured actress Sivan Alyra Rose from the Netflix Original, “Chambers.” She is also gearing up to launch a beauty collaboration with Indigenous Cosmetics, a Chippewa- and Lakota- woman-owned cosmetics company based out of Denver, CO.

Kelly Holmes is an example of what it means to accept your own and be yourself. Follow her magazine on Instagram (@nativemaxmag), Facebook (@nativemax) and Twitter (@nativemax) to keep up with the amazing work she is doing.