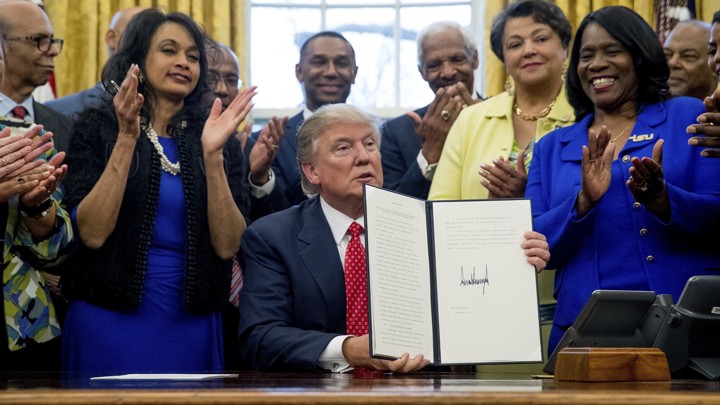 Historical Black Colleges and Universities (HBCUs) have produced some of our most well-known leaders in America. Lately, I have been curious about the future of farming at HBCUs. Surely HBCUs produce programs and degrees related to agriculture, and they certify people to go and work in the agriculture field. But do we farm for ourselves?

President Donald Trump signed an executive order on HBCUs in 2017 that allows money to go towards scholarships, new centers and projects, infrastructure and research. The catch is always in the fine print. After summing it all up then giving it some time to develop (to see if the bill proves itself), we will know if it is a power move for the imperialists or the common game of give-and-take to advance the people. We will see if we are giving some of our freedom or control up for favor.

The bill moved the “initiative” of the HBCUs into the White House and out of the Department of Education, where it was housed under the Obama administration. The move “pretty much [places] an advisory department over the HBCUs under Trump’s wing,” according to an article published on politico.com. “So the initiative or the brain of the operation went under the White House’s wing but the budgeting remained in the Department of Education.”

Did you see the picture of all the heads of the HBCUs in the Oval Office with President Trump? Beautiful, right? We must remember that these large sums of money that hit headlines don’t get issued out all at one time. The signing of the executive order looks good on the HBCU leaders’ resumes, who wanted funds for infrastructure. But did they give up control?

The money asked for went towards increasing enrollment tools like college readiness, financial aid, and infrastructure. I do admit that this article can come off a bit pessimistic on some points, but it is just a small hole I see in the progress of HBCU’s and Black people as a whole. Furthermore, the bill should promote more self-sufficient HBCU’s through basic necessities like their own farmland for the Black population they represent, and not just bigger buildings or infrastructure and more students. Less than 2% of Blacks are farmers in America. An average of less than 3% graduated from HBCU’s with an agriculture degree in 2016. That is quite disturbing and can’t be explained as coincidental. This is what the Honorable Minister Louis Farrakhan has seen and spoken on in earlier lectures and upon visiting HBCU’s like Tuskegee University.

One HBCU, Morris Brown, fell into debt and probation, and the school eventually lost accreditation in 2002 (which is said to be in the works of being regained by new interim president Kevin James). After what happened to the school, for a moment it seemed as if HBCU’s were under a full-fledged attack and were losing themselves. And in the past few years, there has been a steady increase of non-black enrollment in HBCU’s. Does America see that it is best not to destroy what it can use to train its own citizens? Does having more of our own farms or HBCU farms come after the constant plea of aid for enrollment and programs? In a methodical thought and according to the Teachings of The Most Honorable Elijah Muhammad, this may seem backwards. The Honorable Elijah Muhammad teaches that everything comes after land and its cultivation. In this age of technology, one may say different. But in this same phase of gentrification, we must survive.

Who are the scholarships for? We must qualify ourselves. Here is another opportunity for America to save herself through fair dealings with God’s people. It is also a very urgent message for us to separate and have our own, especially if our own schools are being hamstrung from providing that vital need for us as a people, which is land and farming. We should work on land grants just as much as we go to the government for aid in enrollment and research.

The Honorable Minister Louis Farrakhan stated in “The Time and What Must Be Done” part 36 that “Farming is the engine of our national life.” He also states that second to land is animal husbandry. We can depend on God and the strength of ourselves. A visit to the oval office won’t do.