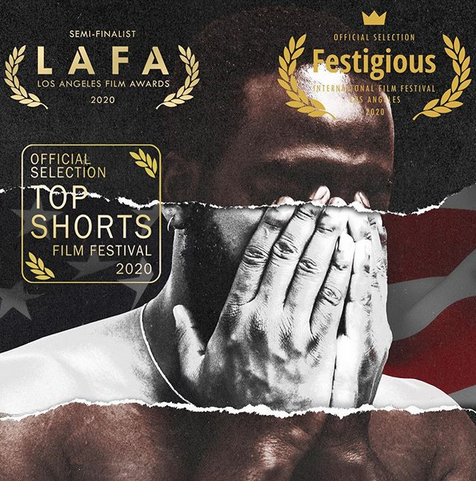 In the midst of police brutality and protests, filmmaker Darryl Muhammad, or D. Roe, released a short film, Skindeep, exploring a reality where roles are reversed.

According to the video’s YouTube caption, “’Skindeep’ navigates modern day America – addressing racial tensions, marginalization and self-identity of who we are as a people. These topics are confronted with an unusual scope, which uses its cinematic lens to tell the story of so many individuals who face these topics daily. In a manner that can make those individuals who may not relate, feel the same pain and frustration.

“The goal of this film is to take the different figurative societal tables and push them together, so that we can lay out the discussions that need to be had. Are we truly seen as equal? Would you understand the cry for liberation if you sat in the chairs of the oppressed and marginalized? Let this short film dig deep and pull out the true color of the skin of humanity.”

The film was awarded top short film of 2020 by the L.A. Film Awards.

The opening of Skindeep leaves a haunting feeling, as right off the bat we learn that in this fictional world, White people were enslaved instead of Black people.

Skindeep forces those who watch to confront the horrible reality of racism and White Supremacy. It boldly explores the question, if White and Black were reversed, would we be on the side of oppression or supremacy? In the film, everything that was and is done to Black people in our current world is instead done to White people. Just as we wear White people’s names, given to us during slavery, the White people in the film wear Black names, given to them by their Black slavemasters.

The short film had its moments of humor. The phrase “once you go White, life goes right,” caused me to chuckle, as it mirrors the phrase “once you go Black, you never go back.” In other words, according to Urban Dictionary, once a White woman sleeps with a Black man, she can never go back to dating men of other races. The phrase has a historical context in that White women would want to “try out” Black men as an experiment rather than out of love.

A less popular phrase in existence, “Once you go White, nothing ever goes right,” speaks more to inequality and the failure of non-White people to pass for White in society. While the alteration of the phrase in Skindeep is humorous, it is also a reflection of real life thought patterns. And that makes it not so humorous.

Skindeep made me uncomfortable, as it should. I was uncomfortable when I saw Black officers doing to White teenagers what White officers do to Black teenagers. We should all be uncomfortable with injustice, no matter who is enacting it and who is the victim of it. To see one of the young Black men not caring that one of his fellow students just got shot made the situation worse.

But that’s the horrible reality that Black people find ourselves in. People can witness our murder on video, such as what happened with George Floyd, and still find excuses and justifications for why we were murdered.

Beauty standards were another focus of Skindeep. Today, we see Black people mimicking White beauty standards, but in the film, we see a little White girl mimicking Black beauty standards. In recent years, there has been a big push for Black women embracing natural hair and natural products, but the goal is merely to love self, not to rise up to the place of superiority. Still, that’s what we see in the film.

Skindeep causes anger. When the Black police chief says, “None of this would happen if you just do everything my officers tell you and just comply,” anger rises in me. Because that’s a line I hear every day with each viral incident of police brutality. And watching the film, there’s this sense of, I want to be on the side of Black people because they’re my people, my fam, but I can’t be on that side. I can’t side with injustice. And perhaps that’s the reality many White people face, because your father might be that officer. Your uncle might be that judge. How do you choose between family who you know are wrong and the oppressed, the victims of your family?

Skindeep is only 14 minutes long. It is simplistic yet powerful. But don’t take my word for it. Watch it for yourself: https://www.youtube.com/watch?v=YqwzUOua8LA&feature=youtu.be.