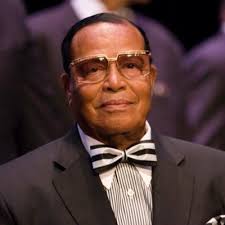 Who is the “them”? It is those in positions of power. It is the ones that decided to ask former president Barack Obama during a 2008 democratic debate if he would accept support from Minister Farrakhan, pushing the then candidate to denounce Minister Farrakhan.

History shows us that leaders and celebrities from the Black community have always been questioned on their thoughts about Minister Farrakhan, making sure that the person is presented with misquotes and sentences that are out of context and do not represent who the Minister is and that portray him as an evil madman.

Unfortunately many times, the person begins to speak ill of the Minister in front of the world and out of fear of losing their positions of power and influence that they may have in this world. They denounce the Minister, a man who has worked for the good of the Black community for over 60 years.

The Farrakhan litmus test is an incredibly old trick used by forms of media. One dictionary defined litmus test as an “effective and definite way of proving or measuring something.” What is being measured when Farrakhan is used as the litmus test for Black celebrities and leaders?

The Honorable Minister Farrakhan said in a lecture on July 11, 1993, “This is why white folk gotta ask all of you who are in positions of authority, ‘What do you think about Farrakhan, what do you think about him (Farrakhan),’ and based upon how you answer, they can determine how alive or dead you are. How you relate to me and what I teach determines how alive or dead you are, in the eyes of the oppressor.”

These words stand true, as someone who is alive and free can stand on truth and show fearlessness, but someone who has a dead mentality and is worried about what others may think cannot stand strong and often show fear and cowardice.

When Tamika Mallory was on The View, host Meghan McCain once again used the age-old Farrakhan Litmus Test, putting pressure on her to denounce the Minister after reading many misquoted and out of context words from him. Tamika Mallory however, showed strength and refused to use such language and would not denounce such a man. This is strength that we must all show when we get questioned and pressured to denounce someone who has done nothing but good for us and continues to do so.

When Tamika Mallory’s connections with Minister Farrakhan were brought to light and she refused to denounce him, her leadership came into question, as if all of her great accomplishments and her fight for justice and women’s rights would mean nothing by her association with Farrakhan.  Is associating with this man that big of a crime to them?

We can no longer stand for being told who our leaders can and cannot be. The audacity of those on the outside who have never had our best interest in their heart and have not put in nearly the amount of work that Farrakhan has; and of those who only come around every two years, make false promises and tell lies just to get elected into office, to tell us we should distance ourselves from Louis Farrakhan is ridiculous and falls on deaf ears.

Whenever riots break out or there is unrest in the Black community due to us being fed up by the injustice we are given, news stations and media will question, “Where is the Black leadership? Who are the leaders?”

Well many have recognized that our leader, teacher, and guide is the Honorable Minister Louis Farrakhan, and we should not worry about what anyone has to say about it.

Why is Farrakhan the litmus test? Because he represents the age of a new man and a new woman; an age that will no longer tolerate injustice; an age that will leave the mental bondage of our oppressors and will go and do something for themselves. This is not an age that the wicked rulers of this world want to see because it represents the end of their world as taught by the Honorable Minister Louis Farrakhan. To try and prevent this new world, we get presented with the, “What do you think of Farrakhan?” question.

Being able to withstand the litmus test takes faith in God, that He is with you against any opposition. It takes strength and fearlessness. It takes a true understanding on who Minister Farrakhan is and not what the media says he is.

We will all be tested, and regardless of what religion we claim or don’t claim, I believe the words in psalm 23:4 will help us all when we are tested.

Yea, though I walk through the valley of the shadow of death, I will fear no evil; for Thou art with me; Thy rod and Thy staff, they comfort me.

Anyone who presents the Honorable Minister Louis Farrakhan in a negative way, anyone who knowingly lies about him and anyone who tries to convince people not to listen to him is an enemy to Black people, because you are actively trying to rob the Black community of its leader and the greatest preacher of truth in the world. But you will not be successful.